Preparing for Twins - The Diaper Stash When we found out we were having twins, we were overjoyed!  There were happy tears as we saw two heartbeats on our seven week ultrasound!  As happy as we were, I'd be lying if I said there wasn't a bit of panic after the immediate celebration, when we realized how much two babies were going to cost!

One of our biggest expenses was going to be diapers!  We planned on me working through my pregnancy, and then making the transition to staying at home full time once the babies were born.  Having a diaper stash waiting for us when we came home from the hospital was  a huge financial help to us as we made the transition from two incomes to one income.  Our goal was to have four to six months of diapers purchased before the twins arrived, and then switch to cloth diapers at six months.  I didn't want to be overwhelmed with cloth diapering in the beginning, as adjusting to being a new mom of twins was going to be overwhelming all on its own.  Plus, I didn't want to have to buy two sets of cloth diapers, a newborn set and a one size set.  By buying diapers on a weekly basis throughout my pregnancy, with coupons or in-store diaper deals, we had enough diapers to last several months after the babies arrived.  I wish I would have taken a picture of all of our diapers.  The nursery is an average walk-in closet, and our diapers filled the entire top shelf all the way to the ceiling in the entire closet.


Trying to figure out how many diapers we were going to need took a little research.  This was one of the most helpful post I found about stockpiling diapers.  My husband is a numbers guy.  No, really....he is.  He works with finances for a living, and actually thinks it's fun to make spread sheets about every financial aspect of our lives.  When we decided we wanted to start buying diapers before the babies were born, he sat down and made one of his spread sheets.  Based on our research, we were planning on each baby going through 10 diapers a day, so that's 20 diapers everyday, or one small pack of diapers.  Never having kids before, we were just guessing on that number, but once the boys came, we soon learned that we were actually dead right about that estimate.  The spread sheet calculated how many diapers he thought we needed to buy and at what pace we needed to buy them before the babies came.

We also decided to only buy Pamper's swaddlers, since we were primarily stocking up on size newborn, one and two diapers.  Many people told us Pamper's swaddlers were the only diapers their infants could use, and they are the diapers the hospitals use.  I'm glad we took their advice, because that is the only kind of diaper one of my boys was able to wear without leaking.  Once we hit the size three, the boys could both wear Luvs without any leaks.

The only thing we didn't calculate properly was the sizes that we needed.  We assumed that the babies would only be in newborn diapers for six weeks, and they were actually in newborn diapers for over three months.  They were healthy 5-6 pound babies at birth, but it just took awhile to grow into a size one diaper.  And once they got into a size one, they only wore a size one for about a month before transitioning to a size two.  The nice thing about diapers, is that most stores let you switch out sizes without a receipt.  We also had several gift coupons given to us as a baby shower gift that allowed us to get free diapers.  Those were a huge blessing to us as we needed several more newborn diapers once the babies were born.

There are always pros and cons to a diaper stash.  Figuring out the sizing, or having too much or too little of something can be a little annoying, but it is really easy to fix.  For us, a diaper stash was a blessing, as it helped us prepare for the arrival of our little ones.  With out using cloth diapers, our diaper expense was a couple hundred dollars a month.  Already having a few months of diapers stocked up once I brought the babies home and stopped bringing a pay check home....well, it was just one less thing I had to worry about.  And so if you have any interest in creating a diaper stash as you prepare for your little one's arrival, let me finish this post by giving a few tips about getting the best deals for a diaper stash: 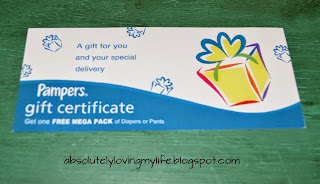