This past week I’ve shared the following cleaning recipes with you:  dry laundry detergent and fabric softener crystals.  Today I am going to share with you a recipe that I found online for dishwasher detergent. 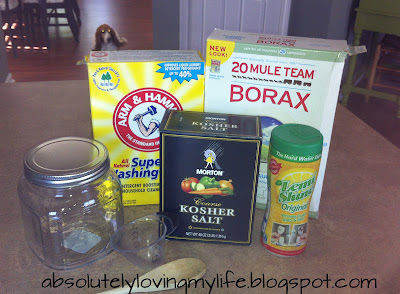 DIRECTIONS:
Mix ingredients together well.  I found that mixing them in a small food processor works best. 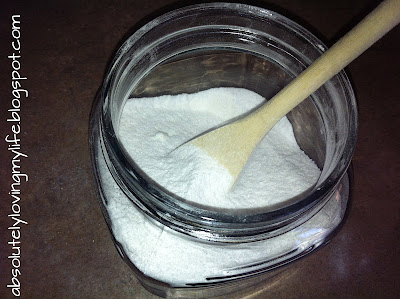 The first time I made this recipe, I stirred the ingredients with a spoon and stored it in the bag that my old dishwashing tablets came in.  The next day, the recipe was hard as a rock.  I was pretty bummed about that.  I thought this recipe was gonna be a flop.  I think it may have been something to with the lemon shine mixing with the salt, but I’m not sure.  My husband said that we needed to keep the homemade detergent in an air-tight container, so I made a new batch and put it in a glass container.  It did better, but it still had the tendency to go from a crystal-like powder to a solid if I didn’t stir it up each day.  Since we only need to run the dishwasher every few days, this was a problem for us.  What I ended up doing was taking my second batch of detergent and running it through a small food processor.  This seemed to do the trick.  The food processor mixed the ingredients thoroughly and made the texture of detergent more of a powder.  I haven’t had any problems with the texture of the detergent since then. 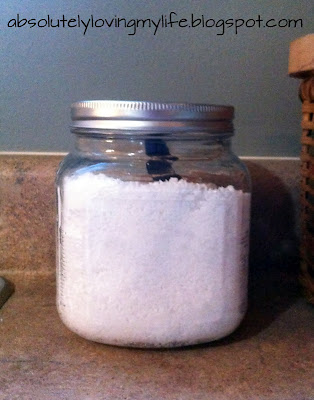 So, how does the DIY detergent hold up to store-bought dishwasher detergent?  I’d say it holds up well.  Our dishes appear to be getting clean and we haven’t noticed any residue left on the dishes.  I should say that we do, and always have, rinsed off our dishes before putting them in the dishwasher no matter what detergent we use.  Therefore, I don’t really know how this detergent works for crusty food left on dishes for several days.   For us, the detergent did the job just fine.

One last thing before I break down the cost of this recipe.  I want to breifly touch on one of the ingredients mentioned in today's post.....Borax.  Borax is controversial among many who make their own cleaning supplies.  Some say it is "toxic" and "harmful" while others say that is perefectly fine to use when making non-toxic homemade cleaners.  Even more confusing is the fact that Borax is listed as a main ingredient for cleaning recipes on almost every "green" website I've found.  I could list off several facts about Borax and give my opinion on it, but why do all of that work when someone else says it better than I ever could.  Go here to read more about Borax.  My PERSONAL opnion is the same as hers, and I will continue to use it around my house. You, however, will need to form your own opinion about Borax.

Before I close this post, I should also say that vinigar is a cheap, natural rinse agent.  I really can't stand the smell of vinigar, so I have not personally tried it.  I just thought I'd throw that little bit of info out there for those who may be interested in trying it;)