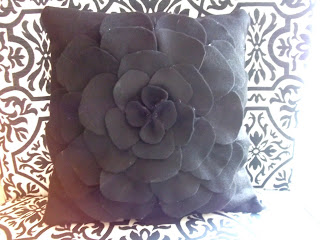 It seems like I've seen felt flower pillows everywhere lately, and I’ve really been wanting to make one.  Felt is very inexpensive.  I knew I could make one for a little over $5 if I used coupons.  I used the following materials to make my pillow: pillow form, black felt and a hot glue gun.  Yes, you read that correctly…I used my hot glue gun.
If you recall, I have not invested in a sewing machine and have come to adore no-sew adhesives.  However, felt is a porous material, so I knew that no-sew glues and iron-on adhesives would be difficult to work with.  Having nothing else in the house to use, I called on my trusty hot glue gun to the job.  Now, I don’t necessarily recommend this, but I can tell you that it works.  The problem I see with using hot glue is washing and drying the pillow.  Since my pillow cost around $5 and is only being used as an accent pillow on a chair that rarely ever gets used,  I didn’t fret over this problem too much.  I did discover this product at Micheal’s after the fact, and might suggest it for no-sew projects when working with materials such as felt in the future.
I don’t have a tutorial for this pillow, although I’m sure there are several out there.  I’ve seen enough flower pillows on store shelves that I  had the basic idea in my head of how to create one.  I made the pillow just like many of my other no-sew pillows seen here, only I used a hot glue gun.  After the actual pillow was created, I cut out several felt petals, arranged them on the pillow until I liked what I saw, and then I began gluing.
This was a quick, easy, inexpensive project that I think turned out pretty darn cute, and I really like the way it looks on the black and white chair.   In fact, it was so easy that I have more felt projects to  post about in the near future.  Until next time, happy crafting everyone! 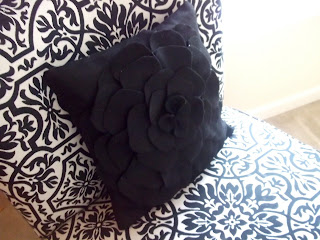 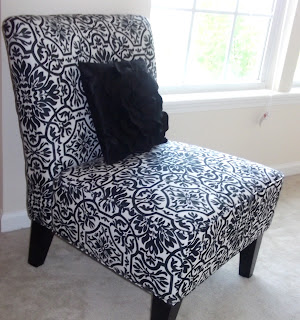