Ever have one of those weekends where you just want stay in?  This past weekend was like that for me.  I’m not sure if it was the rainy looking weather that never actually rained on us or the fact that we were still recouping from vacation.  Either way, we ended up having a lazy weekend.  In the process of trying to figure out where we were going to go for our date night, I told my husband that I was just too tired to go out, so we decided to have date night at home.
The decision was made, andI found myself in need of an easy yet casually romantic dinner to make with ingredients I already had on hand and could preferably be made in thirty minutes or less.  Where else to turn for such a dilemma than Pinterest?  After running a few morning errands on Friday, I looked through some recipes on my Pinterest pin board and decided that this recipe was going to be dinner.  The problem was that I didn’t have all of the ingredients for the recipe, and I didn’t have time to make a crock pot meal.  Since I did have most of the ingredients, I chose to fumble my way through the recipe and do my own cheaters version of it on the stove.
Prepare yourself, because there were no measurable ingredients as I threw this recipe together.  I’m gonna tell you how I made it the way my momma would….that is, a pinch of this and a dash of that;)  If you think it looks appealing, you can try my cheaters version or the original Pinterest inspiration, which I’m sure taste much better than mine. 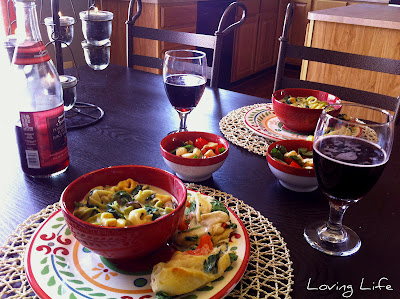 The first thing I did was make a caprese salad (Matt’s favorite) by mixing the following ingredients together:  a container of cherry tomatoes (halved), a bunch of fresh basil (coarsely chopped), fresh mozzarella (drained and chopped) and a few splashes of balsamic vinaigrette to taste.  I set it in the fridge for the flavors to merry, and the salad was done:) 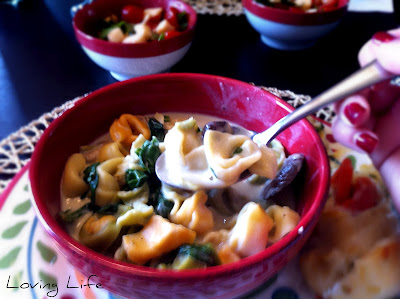 Then, I boiled and drained a bag of cheese tortellini, and added the following:  a jar of alfredo sauce, a couple splashes of equal parts milk and vegetable stock to thin out sauce, a container of sliced mushrooms, a few sprigs of fresh basil, ¾ a bag of fresh spinach, a generous amount of grated parmesan cheese, one clove crushed garlic, a pinch of oregano, a pinch of dried basil, black pepper to taste and a dash of fresh grated nutmeg.  I gave it a stir, and soup was done!
Next, I rolled out a container of crescent dough and assembled on top of the dough the following:  sliced provolone, the remaining fresh spinach and tomatoe slices.  I rolled the dough back up and sliced it before putting it in the oven.  A few minutes later, the rolls were done:) 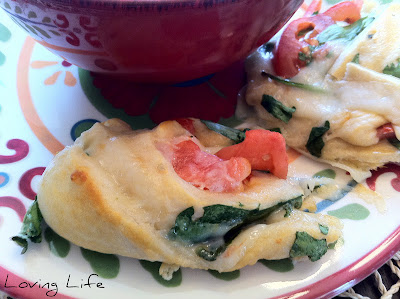 Lastly, I set the table, poured two glasses of sparkling pomegranate juice, just as the hubs was coming home from work.  And so there it was, our casually-romantic date night – eating dinner at home and going to bed early…..we’re so old!!!  I wish I could say the rest of our weekend picked up the pace a little, but it didn’t.  It was just a lazy weekend where we stayed in.  What can I say…..sometimes, you just need weekends like that;) 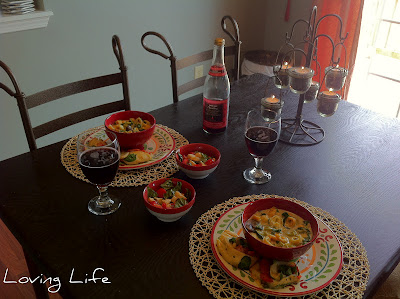