Adoption Update: The beginning of a long process....

If you’ve read my blog lately, you know I’ve been giving several fertility updates.  Today I want to give an adoption update.   A few months ago, I announced that we were beginning the process of adoption.  Today I want to explain how we came to that decision and exactly where we are in the adoption process.


Adoption has always been a first choice for us. The fact that we have been struggling with infertility really has nothing to do with our decision to adopt.  My husband has a heart for adoption, because he was adopted from when he was three.  I have a heart for adoption, because God put a burden in my heart for the orphans many years ago.  Before we got married, adoption was something that we talked about, and we both really wanted for our family.


While our struggle with infertility has not had any impact on our decisions to adopt, it has had an impact on our decision of when to adopt. We always thought that we would have a few kids biologically before we started the process of adoption, because we didn’t think that we could afford adoption until later on in our marriage.  Facing infertility has forced us to face the fact that we may not ever be able to get pregnant, no matter how hard we try.  In November of this past year, after being disappointed once again that another month passed without a pregnancy, we decided that perhaps it was time to start getting serious about adoption; however, we weren’t finished seeking fertility treatments.  For us, that meant that we would seek both adoption and fertility at the same time.


It’s been said by many that God is in the adoption process.  That He opens and closes doors along the way, as He leads in certain directions.  Even in this very early phase of our adoption process, we have seen His leading.  After we agreed to start getting serious about adoption, the first thing that I did was reach out to a Facebook friend who I knew recently adopted.  She was, of course, encouraging as she answered some of my questions and shared a little of her story with me.  She also said something in our FB messages that really pulled on my heart strings.  She said, “My counsel to everyone that I talk to is that if God has tugged on your heart in even the smallest way concerning adoption, and finances is the most scary/concerning part about the entire process, then TO IT!!! God will take care of that part.”  She went on to say, “It is expensive, I will not lie. however, I always refer back to my statement before--God's heart is for the orphan. He WILL take care of the costs--guarantee because HE commands us to care for orphans.” After reading her FB message, I began to weep.  Some of my tears may have been from the crazy hormones I was taking for fertilty, but the majority of my tears were because I knew that God was wanting us to step out in faith and begin our adoption journey.  God just used her words to confirm it.


We committed ourselves to adoption that very night, and the research part of adoption began immediately.  We spent hours looking over the facts.  This part can be overwhelming, because there is so much to learn about adoption if you are first-timers like us. In the midst of our research we stumbled onto a website of a local organization that deals with certain aspects of adoption here in Indy.  While on that page, we came across a name.  The name that we came across was the name of Matt’s best man’s wife’s sister, who my husband had actually met on a few occasions.  She happens to oversee home studies for international adoptions with her organization. To us that was another sign.  We wrote her contact info down and decided to reach out to her after the holidays were over.


At the beginning of January we were really focused on our fertility, because we had started working with an RE.  We hadn’t reached out to our contact yet…..and that’s when another GOD thing happened.  Out of the blue a friend from church, who had no idea that we wanted to adopt, came to me and said, “I know you and Matt are having trouble conceiving.  Have you ever thought about adoption?”  She went on to explain her reason for asking such a question.  Someone had, out of the blue, come to her and asked if she knew anyone who wanted to adopt.  Long story short, there potentially was a baby that needed to be placed into a home within a month, and the family wanted the baby placed in a Christian home.  As she was telling me all of this, I had done enough research on adoption to know that what she inquiring about could probably not happen for us in that short of a timeframe.  What she didn’t know is that God used her words to give us another big push to once again focus on adoption.


A meeting was set up with our contact for the following weekend.  We went into the conversation with a huge list of questions about adoption, and they were all answered!  We left the conversation with an application for international adoption and a list of agencies that work with Chinese adoptions. When we got our application, we filled it out right away.  The next step was choosing an agency.  We looked over the list that was sent to us and began to research the agencies one by one.  We were really curious about one agency that was within driving distance from Indy.  We arranged a conference call with them, and by the time that call was over we felt confident that we had made the right choice.


After our call with the adoption agency, we felt really good about our decision to adopt from .  The only downside to our conversation is that we were told that we would need to wait until August to really dig into all of the paperwork.  won’t accept our paperwork until I turn 30, and the paperwork can not be more than six months old when they receive it.  That means that the next five months are simply waiting.  That was a little discouraging at first, but we feel confident that we have done what we need to do up to this point.  In the meantime, we can look over the list of special needs the agency gave us to see what kind of special needs we are comfortable with for our adoption.  We can also research the travel part of our adoption.  And of course we can save our money and pray while we wait.  We are told we will spend about $30,000 when it is all said and done. I believe that this incredible journey will be worth every penny!


So that pretty much sums it up.  That’s where we are with the adoption process.  We are in a state of waiting!  The plan is to dig into the paperwork in August, send the paperwork to China next February, and then we are told that on average it takes 18 months from there before we are told to travel to China, meet our child and finalize the adoption.  Bottom line is that it is going to be a long, expensive process.   I’ll keep updates coming, but I don’t foresee any updates for a few months.  All I can say is that I can’t wait for August:) 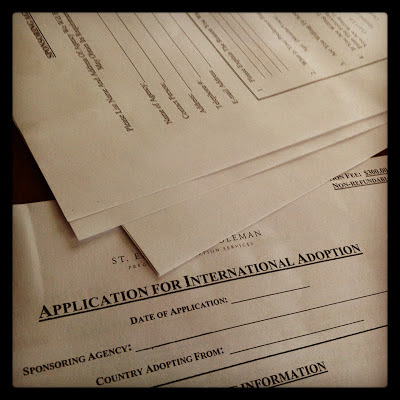