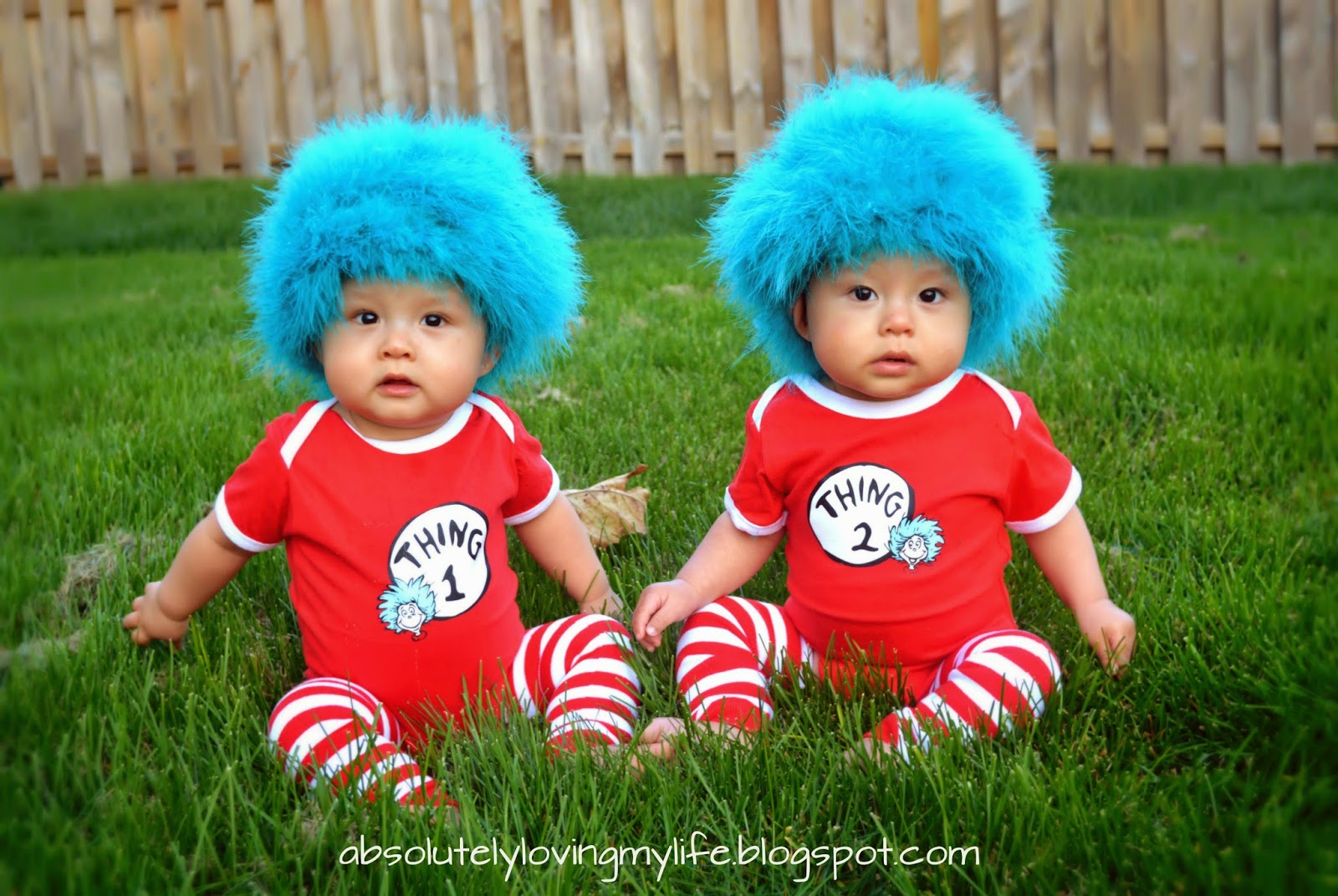 Yesterday I posted a few pictures of our twin boys in their Halloween costumes here.  Today, I want to share how I put these costumes together.

I knew I wanted the babies to be Dr. Suess’s Thing 1 and Thing 2 for their first Halloween as soon as we found out we were having twins.  After seeing the average cost an infant costume for Thing 1 and Thing 2 was $30+ per baby, I decided I could make (or put together by buying items separately and getting crafty) the costumes myself for a fraction of the cost.

As I was putting this costume together, I thought my idea was pretty original.  Not the Thing 1 and Thing 2 idea (that's a common twin costume), but I did think my idea about making the costume, particular the wigs, was a creative idea.  Little did I know others had the exact same idea, as I soon found out when I was looking through Pinterest.  So if you are reading this and saying to yourself, "Wait a minute, I've seen this before", that's because you probably have.

Whether or not I was the first to throw this together or the ninety-first doesn't really matter to me.  I'm just happy that I was able to dress up our babies for their first Halloween without breaking the bank!  I'm also thrilled that they cooperated for a few pictures!

So here is how I put this costume together.  Originally, I was going to make/craft the entire costume.  My initial thought was pretty simple when it came to the costumes.  I was going to….. 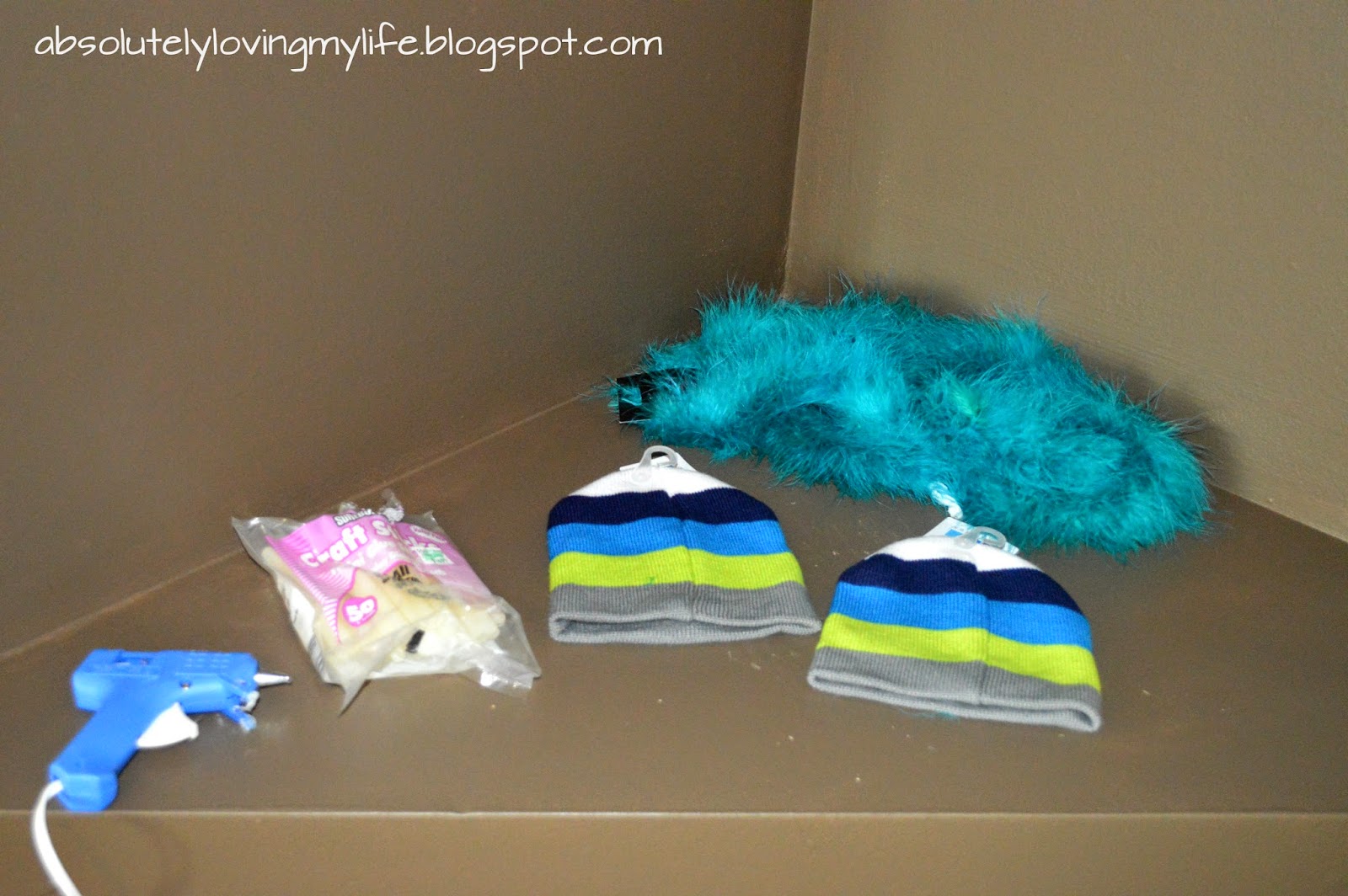 For step 1, I found these iron on decals on etsy, but I had a hard time finding plain red onesies.  I ended up not making the shirts and purchased them instead, because it was easier and cheaper.  I hit the jackpot when I stumbled on these Thing 1 and Thing 2 onesies marked down from $16.95 to $5.98.  At $6 a piece, these would not only work as part of the costumes but could be worn anytime with a pair of pants.

For step 2, I thought it would be really easy to cut the feet off of women’s red and white striped socks and make leg warmers for the babies.  I found all sorts of adult women’s striped socks on eBay with free shipping for less than $3 a pair.  The problem was the socks were from .  By the time I received my order, Halloween would be over.  All of the other socks were going to be $5 or more a pair, no matter where I purchased them.  After finding actual red and white baby leg warmers here on Etsy for $5 a pair, it once again became easier and cheaper to buy the leg warmers already made.  I had to pay a couple bucks for shipping, but I justified the cost of these leggings by 1) using them again in some Christmas pictures and 2) passing them down to babies of either gender if we are so blessed to have more little ones in the future.

For step 3, I finally got to get my craft on!  I bought two baby winter hats at Wal-Mart for $1 each and two strands of fuzzy blue boa from Hobby Lobby.  I bought the boas at separate times, so I could use my Hobby Lobby app and get 40% off of one item.  Originally costing $4.99, the boas cost around $3 each with my coupons.  I then hot glued the boas around the hats, and that’s pretty much it!

A few tips about gluing the boas:

- since the hat was stretchy and the boas were not, measure the boa around each babies' head first before gluing to the hat

- I found it easiest to measure, cut and glue one layer of the wig at a time, by starting at the bottom and working my way to the top

- again, because the hat is stretchy, you have to glue the boa on loosely, almost as if it is ruffling to the hat.  If you glue the boa on flat to the hat, you will have excess boa and the hat won’t fit the baby’s head 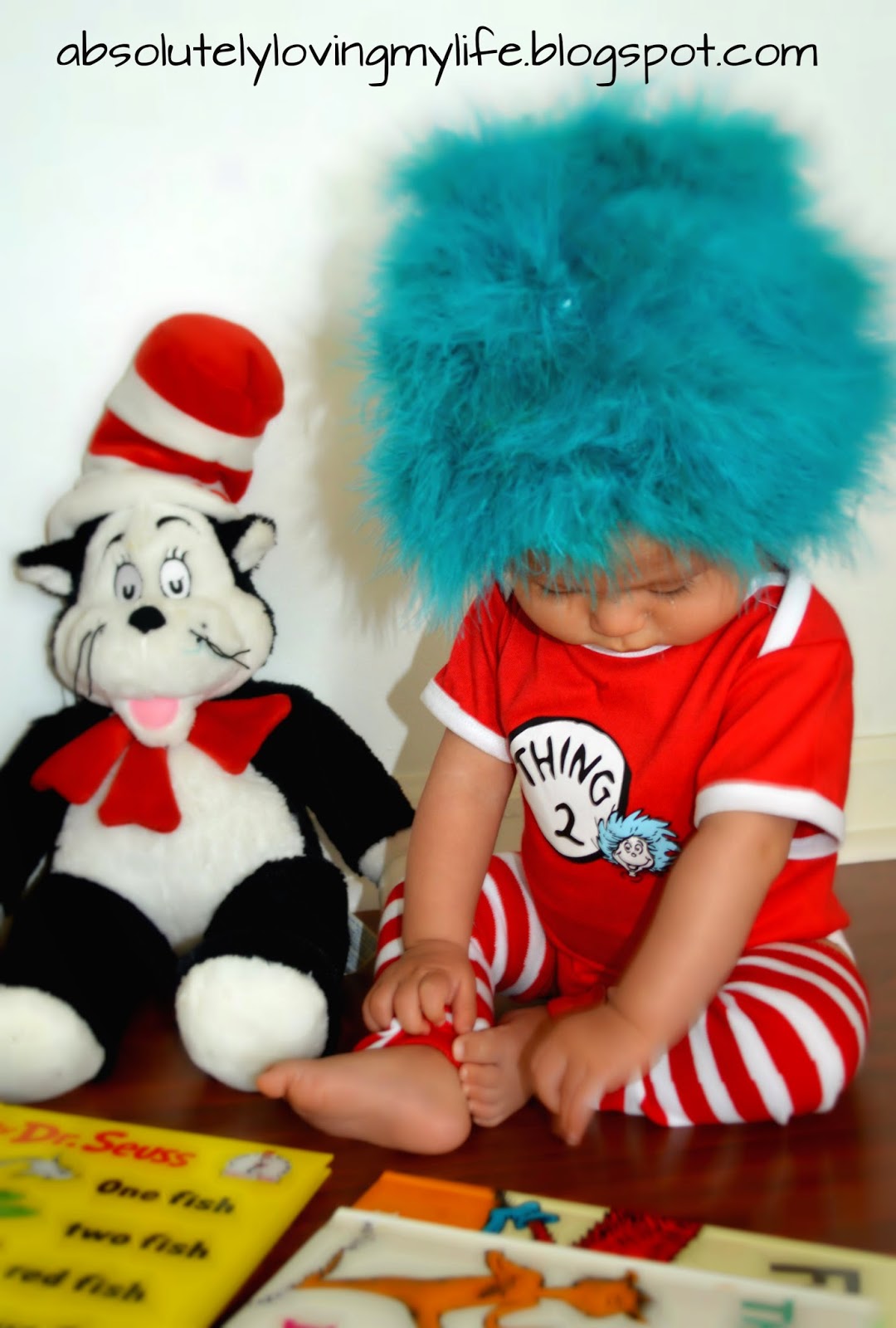 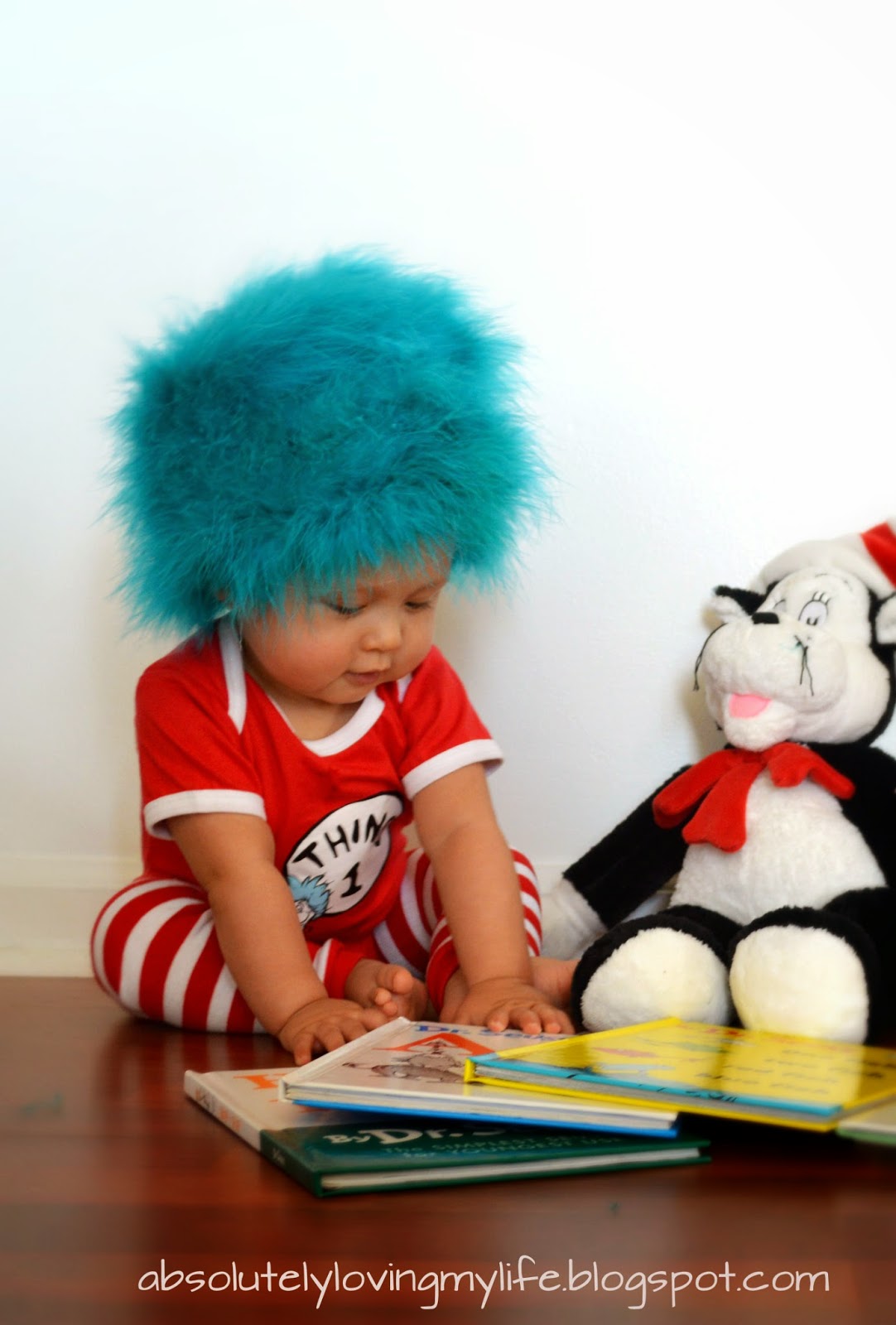 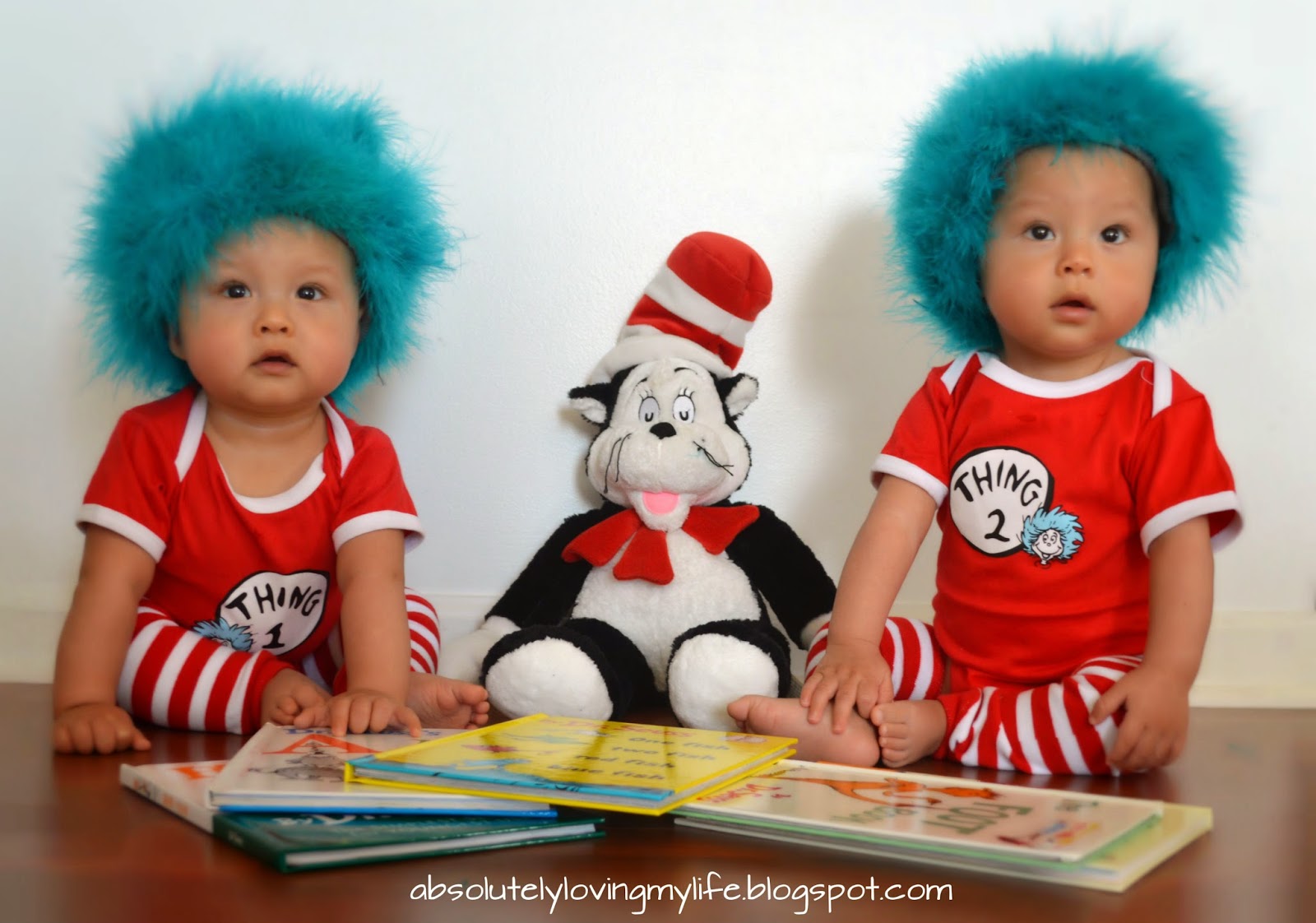