I've said it in my blog before....adoption has always been something we knew we wanted to do.

We both have a heart for adoption.  We both saw it happening at some point.  We just didn't know when it would happen or how we would be able to afford it.

We still don't have answers to those questions, yet here we are stepping out in faith, mailing out paperwork and writing the first of many checks towards the ultimate goal of bringing home our child that we already love even though this child may or may not even even exist yet.  A child that we will have CHOSEN to be apart of our family.  A child that I may not ever feel in my womb, but a child that will be loved the same as the two sons I have known from conception.   How exciting is that! 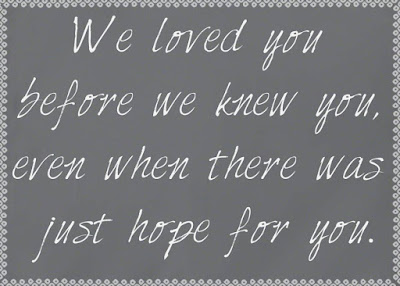 The very first adoption post I wrote was two and half years ago, back in March of 2013.  If you would have told me back then, that in October of 2015 we would just be starting the process of adoption, I would not have believed you.

But you see, some things have happened in the past few years, effecting the timing of our adoption process.  If reading a list of facts bores you, feel free to skip this part.  But for those who are curious, here is the timeline of events that has brought us to where we are now:


And so friends, that's where we are at with the adoption process.  We are basically just getting started again.  So far, we are just filling out paperwork and writing checks.  This a long process.  At the earliest, we are thinking 18 months from now until adoption completion...if we even get to a completion.  There are a lot of things that could happen between now and then that could possibly interfere with the end results of a successful international adoption.  The next step is to get our home study scheduled.  I'll keep updates on the blog as the process unfolds.  Until then, we are patiently and excitedly waiting to bring home a new addition to our family.
Posted by Rachel at 6:38 PM