Letters to my Babies - Week 16

We are so thankful for this pregnancy! After sharing our journey through infertilty on the blog, I knew I wanted to log our newfound 40 week journey of pregnancy on the blog as well. Not knowing if I’ll ever be able to experience pregnancy again, I have chosen to log our pregnancy by writing occasional letters to our babies. The letters will keep my readers posted on how we are doing each week, but the letters will also be something that our little ones can go back and read, as a reminder of how much he or she was loved from the very beginning of their existence. You can read previous weeks by clicking on the following posts: Week 5, Week 7, Week 9, Week 12, Week 13, Week 15.
We had our sixteen week ultrasound on Friday to check on the placenta previa for Baby A.  I am thrilled to say that Baby A has moved up next to Baby B, and placenta previa is no longer a concern in this pregnancy.  Since Baby A has moved up, it also appears as though both babies are now close to the same size and weight.  Aside from the good news about the placenta previa, both babies also appeared to be healthy and well.  Heartbeats were, as usual, in the mid 140’s for both babies, and both babies were VERY active.  You both moved so much it was hard to get pictures that didn’t look blurry!  Considering how active you both are, I asked my doctor why I still haven’t felt any movement.  She explained that it is unlikely I will feel any movement until around 22 weeks.  Both of your placentas appear to be facing out, meaning that you are literally kicking into a giant pillow instead of my tummy.  I asked if the placentas would be this way until birth, and she said yes.  While I would really love to feel some movement at this point in pregnancy, the good news is that the position of the placentas should make all of that movement at the end of my pregnancy a little more comfortable.


Any time we go into an ultrasound, I am always filled with anxiety.  My biggest fear is that they will find something wrong with one of you. As soon as I hear those heartbeats and see two healthy babies, I take a big sigh of relief.  In this particular ultrasound we were even more thrilled to find out that Baby A had moved up.  To top it all off, we were also able to find out your genders! Had we not had to check on the placenta previa at 16 weeks, we would have had to wait until our 20 week ultrasound to find out your genders. 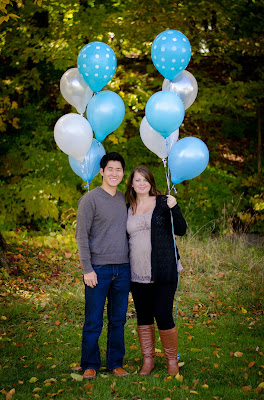 We knew that there was a possibility of finding out your genders at 16 weeks, although our doctor never even mentioned it to us. It was a little early to find out for sure, and it often depends on how well the baby cooperates. Believe me, neither one of you were shy when it came to finding your genders.  Once we got the good news about your basic health and wellness, the ultrasound tech checked to see if we could see if you were boys or girls.  She checked Baby A first, and there was no hiding it.  You are a Boy!  She then checked Baby B, and once again there was no denying the fact that you too are a boy!  We are very excited to know that in just a few months, we will be welcoming our two SONS into this world! I pray you will be brothers and the best of friends for a lifetime!  Daddy and I took a few days to enjoy the news all to ourselves, before having a few pictures taken (all gender reveal photos taken by Kingfish photography) and revealing the genders to our family and friends. 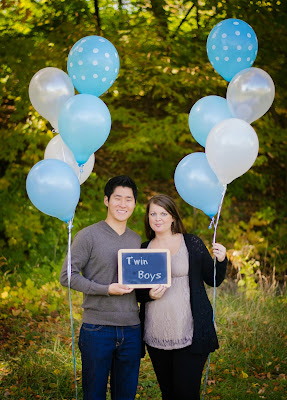 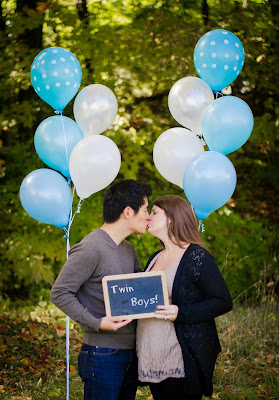 It’s funny, because Daddy and I had not really given your genders too much thought.  We've been so busy going from one ultrasound to the next, that we just haven't really had too many conversations about whether we were having two boys, two girls or a boy and a girl.  Of course the possibility of what we could be having has crossed our minds, but we certainly never said I hope you are a girl or I hope you are a boy.  The few times that we did discuss what we thought your genders were going to be, Daddy had thought we were having a boy and a girl, and I thought you were both going to be girls.  Much to our surprise, we were both wrong! 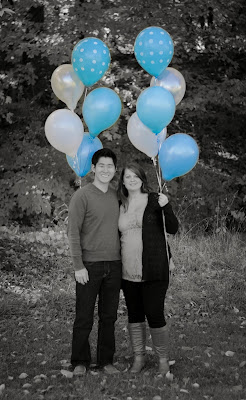 I admit that I was surprised to know that all of the pink I had envisioned quickly turned to blue.  However, I was even more surprised by my reaction to finding out your genders.  I'm not sure if my reaction wasn't what I had thought it was going to be, simply because this wasn't really a gender reveal ultrasound.  It was more or less an ultrasound to check on Baby A.  The gender reveal was just a bonus.  Either way, because we didn’t have a preference on what we were having, I thought that whenever we found out your genders we would both cry and be so excited just like we were when they told us we were having twins.  Yet, when the ultrasound tech typed the first time, I thought to myself, “Really? Are you sure?”, simply because that’s not what I had pictured in my head.  And then the second time I saw being typed on the screen, I found myself thinking, “Really, two boys?  Are you sure that’s not just an extra hand or foot or something else?"  Let me assure you, I wasn’t at all disappointed with having two boys…..seriously, how could anyone possibly be disappointed about that?  I was more disappointed that my reaction wasn’t how I had envisioned it, probably because I was so surprised that it wasn’t what either one of us thought it was going to be.  When my doctor noticed that I didn't seem myself, I explained to her that I felt like an awful mother for not reacting differently.  She assured me that I was not an awful mother, and that my reaction was not uncommon.  She said it was completely normal, and that she was the same way when she found out she was having a son, simply because in her mind she pictured ruffles and bows.  Her mind had gotten attached to all of the pink, and in an instant she had to adjust her mind to think Tonka trucks and mud.  She was a great comfort to me when she said that I will not be delivering two grown men, but two little cuddly babies who will take one look at their mama and love me the way I already love them.  The shock of two boys wore off quickly, as Daddy and I celebrated over dinner and had our first official shopping trip for you.  Even though my mind was excited to decorate a girl nursery and to buy hair bows, pink sparkly shoes and ruffled dresses……I have quickly adjusted to the fact that we are going to have two of the cutest little boys around!  I’ve already planned out a new boy nursery in my mind, and the more cute stuff I find for the two little monkey’s moving around inside of me, the more excited I get about your arrival.  Let the planning and preparing begin!  This is the fun part for me…the part that involves shopping and decorating.  For Daddy, this part is not so much fun:/ It won’t take you long to learn that spending money never makes Daddy happy;) 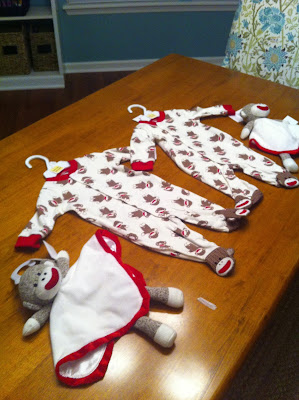 Email ThisBlogThis!Share to TwitterShare to FacebookShare to Pinterest
Labels: letters to my babies, pregnancy