Ok…so I know it has been awhile since I posted a monthly update of my little guys.  My last twin post in the series “Our Twins First Year” was month eight.  My little men turn one is less than three weeks, so I think it is safe to say I have some catching up to do.

I’ll start the catch up game with month eleven.They pretty much turned into toddlers this month.  They don’t even look like babies anymore. They are not walking yet, but this month they started getting up off the floor on their own and are standing for great lengths of time without any assistance.  They also walk all over the place with the assistance of their push toys like it is no big deal.  We are still expecting them to walk before they turn one, but you never know. This month they’ve added clapping on command to their list of tricks, which only includes the high fives they learned last month.

Each month it seems as if I give them more room to roam.  This month they've gotten to explore the entire loft area.  The "baby jail"  as we liked to call it (aka the eight sided play yard), was completely taken down, and is currently in gated pieces being used to block off things I don't want them to get to.  The reason why I took down the play yard, is because I spent the month bringing up toddler toys from our basement and making our loft more of a play area for them to grow into, which means Daddy spent the month, mounting furniture to walls and putting baby-proof pulls on all of the drawers.

As far as their diet goes...well, they eat everything!  They stopped baby purees altogether at nine months and went straight into solids, eating pretty much what we eat at dinner.  Although breakfast and lunch is always toddler friendly finger foods, since I’m not much of breakfast eater and I usually eat lunch when they are napping.

Since they are doing so well with solids, we went from four bottles a day, to three bottles a day.  They were not finishing their bottles, and dropping a bottle seemed to do the trick.  They are now only taking about twenty-one ounces of formula a day.  We also introduced whole milk at the end of the month, starting out with only four ounces with a meal.

With all the eating, comes all the growing.  They still wear a lot of 9mo clothes, because that is the majority of what I have, but they are getting snug.  They are ready to completely transition into 12mo clothes.

We officially outgrew our infant travel system this month and moved into our toddler car seats and double stroller.  The snap and go stroller and infant carriers were the best travel system ever for this Mama!  I miss them like crazy.  Leaving the house on my own is not nearly as easy as it used to be, and with it still being winter, I no longer have the freedom to just load the boys up and go somewhere.  It is too hard to keep them warm in our new system, as it takes me a while to get them both loaded and unloaded to go anywhere.

It seems like we’ve had a break from teething this month.  Ethan still has eight teeth and Aaron has six.  Instead of teething they just battled winter sickness instead.  It's been a cold month, and I don't think I'll ever get rid of these runny noses.  I can't wait for spring!  Not sure if I can survive winters as a SAHM.  Not being able to get out of the house on a regular basis is not fun!

We are still recovering from our sleep regression lapse from last month. I think Ethan is completely recovered and is back to only night waking on rare occasions.  Aaron can still be expected to wake every night sometime between 3 and 5.  Some nights he makes it 8-10 hours sleeping straight through, but it is rare.

I don't think I have any other updates for this month.  It’s hard to believe that we’ve had these little guys almost a year.  I plan on treasuring these last few weeks with my eleven month old babies, before I officially have to say I have one year old twin toddlers. 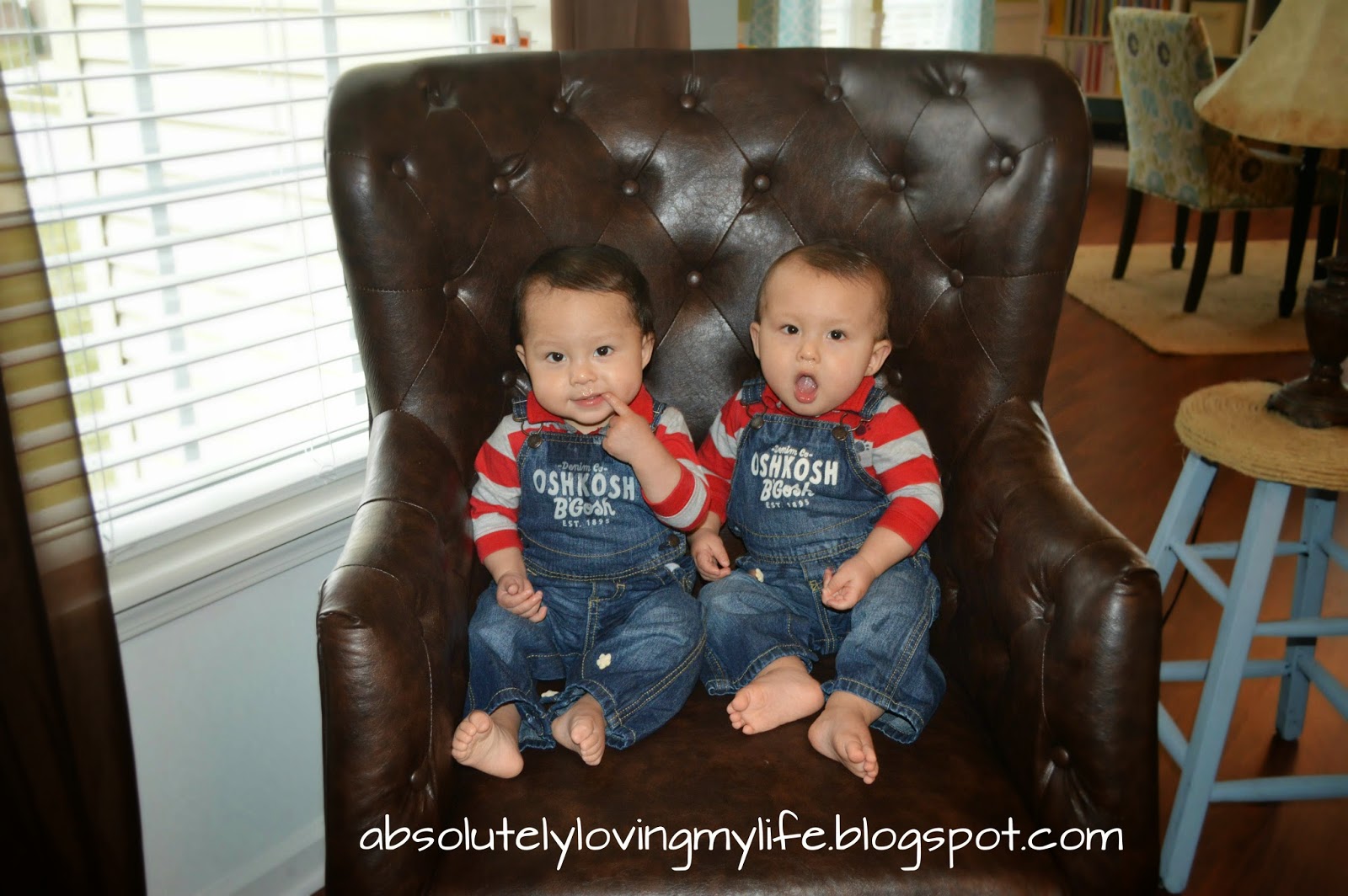 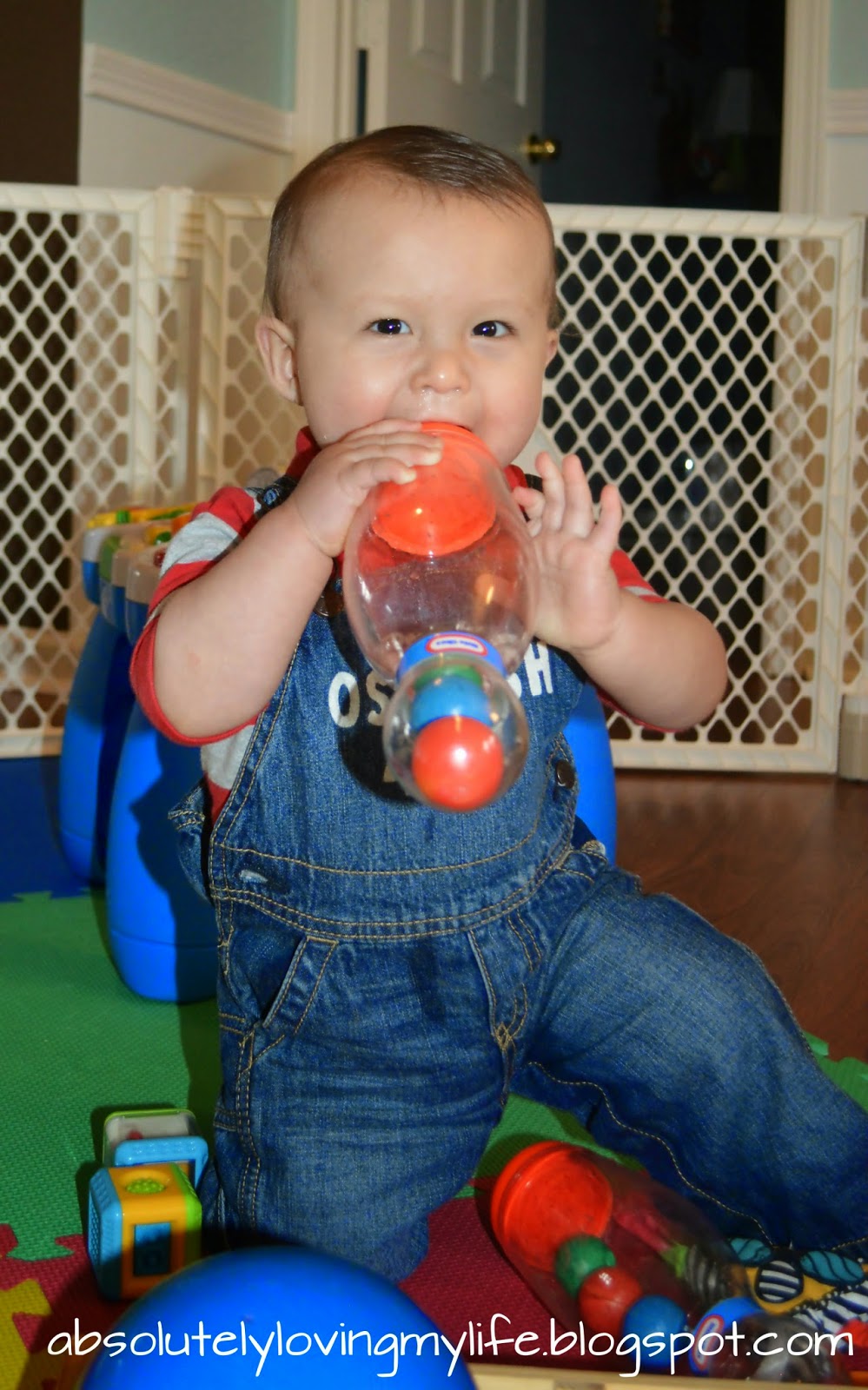 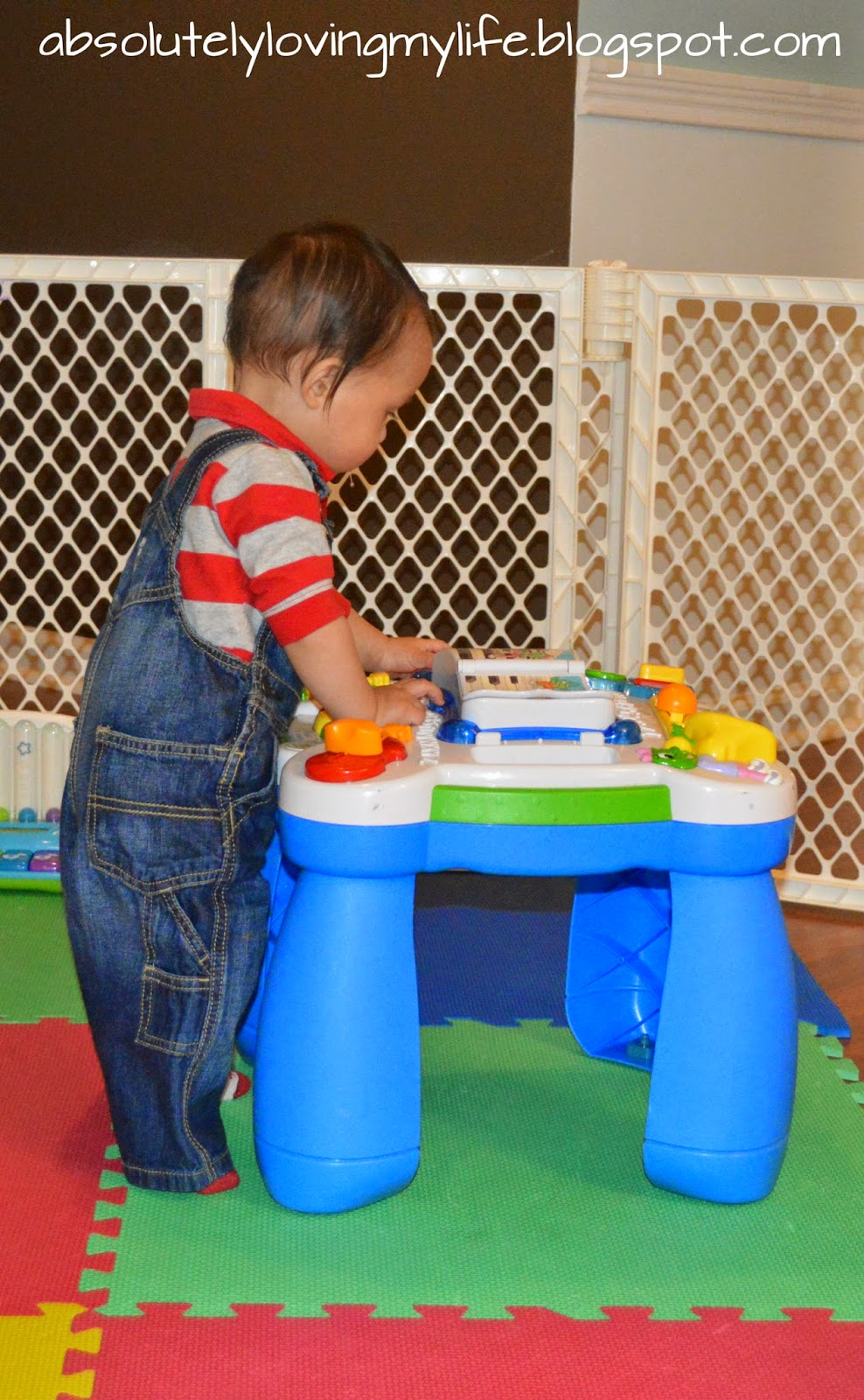 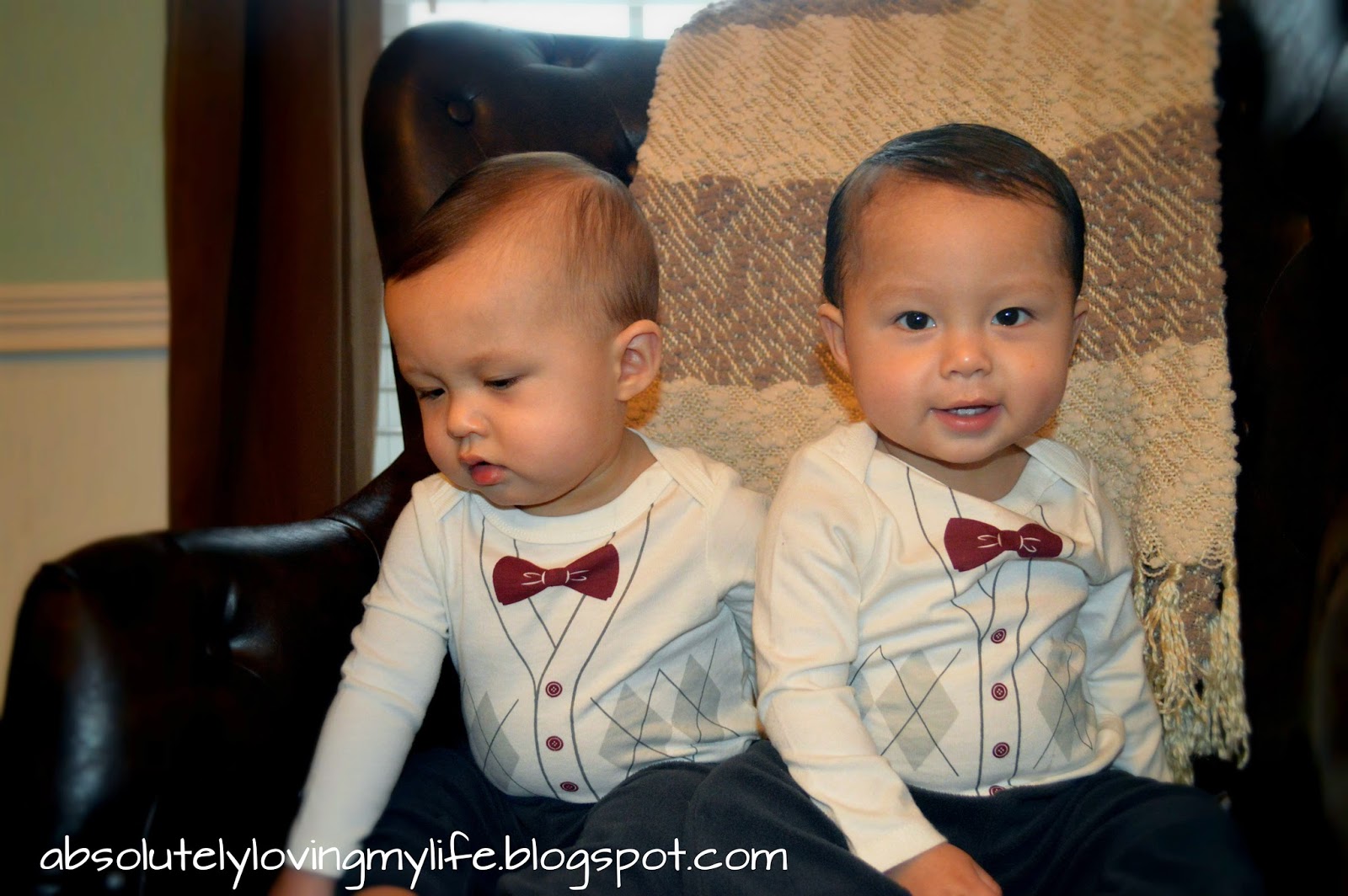 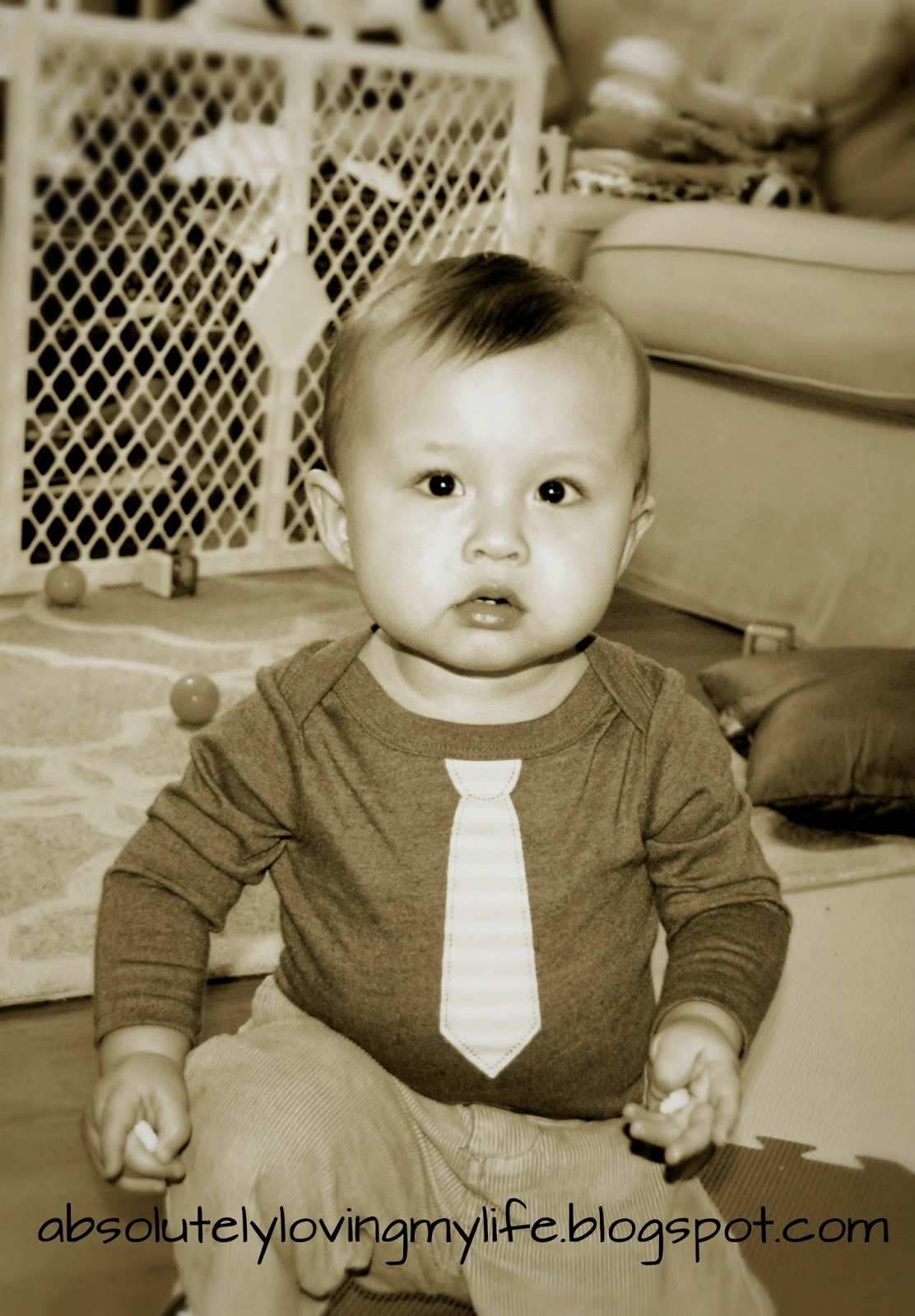 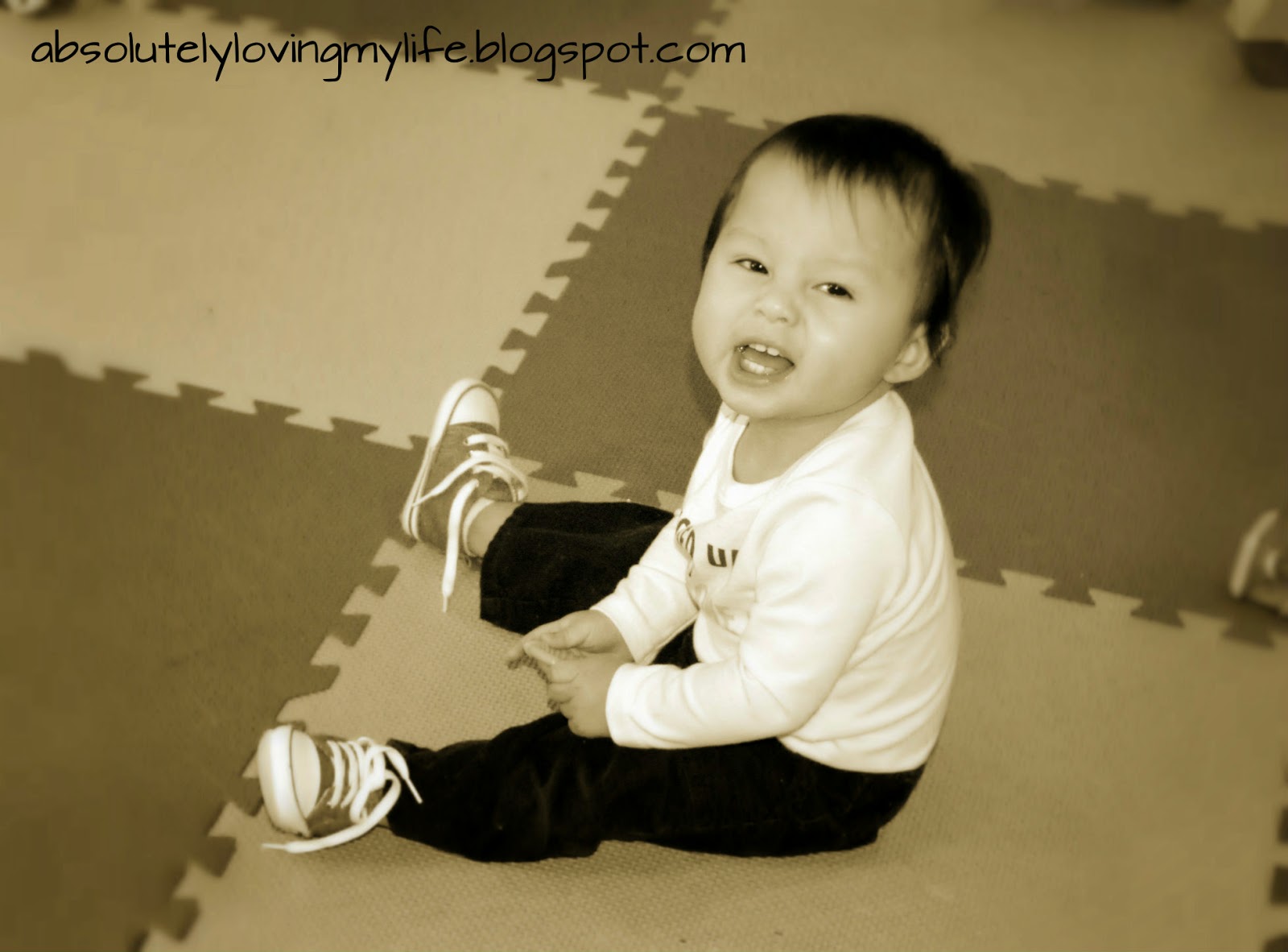 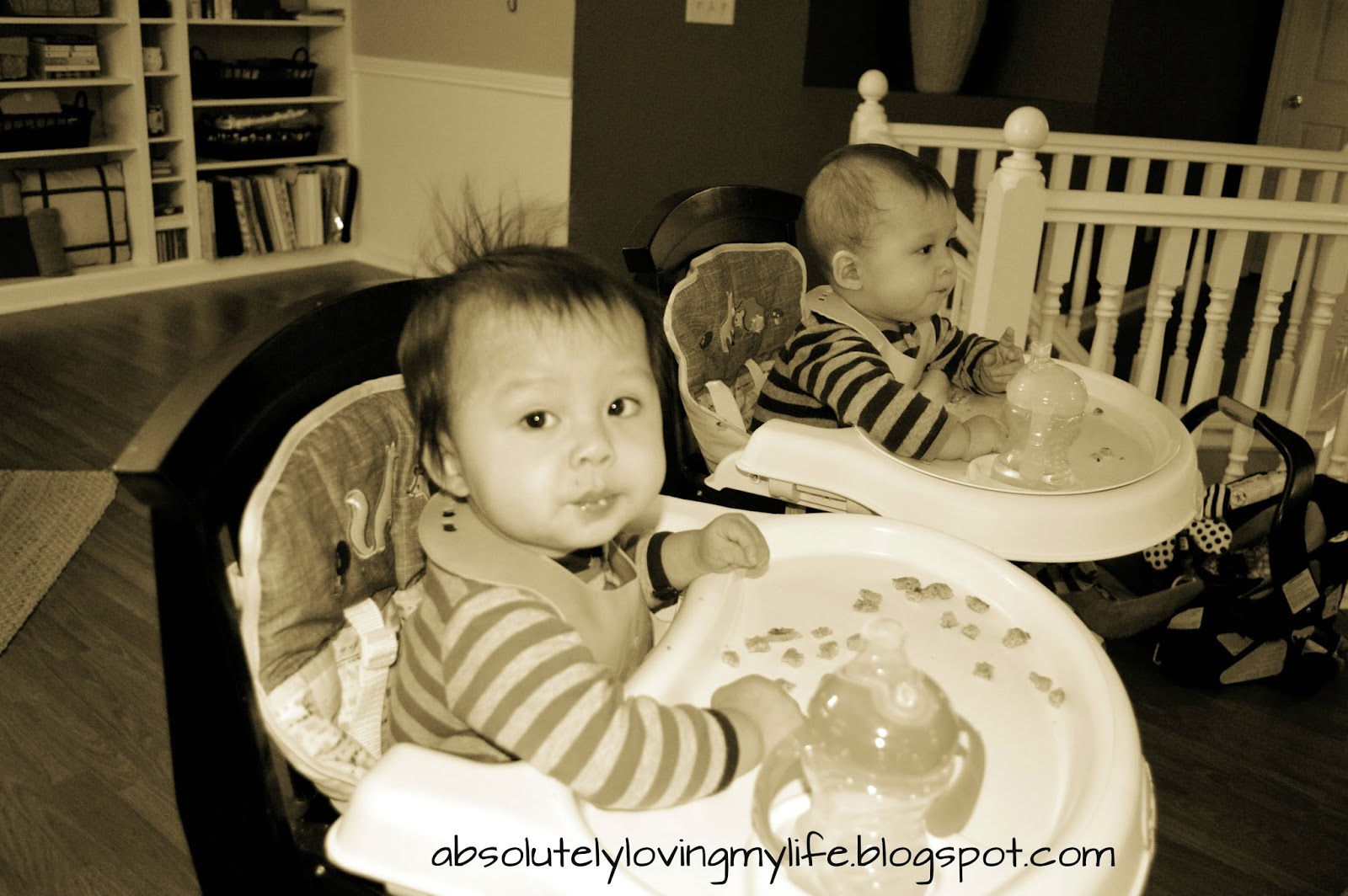 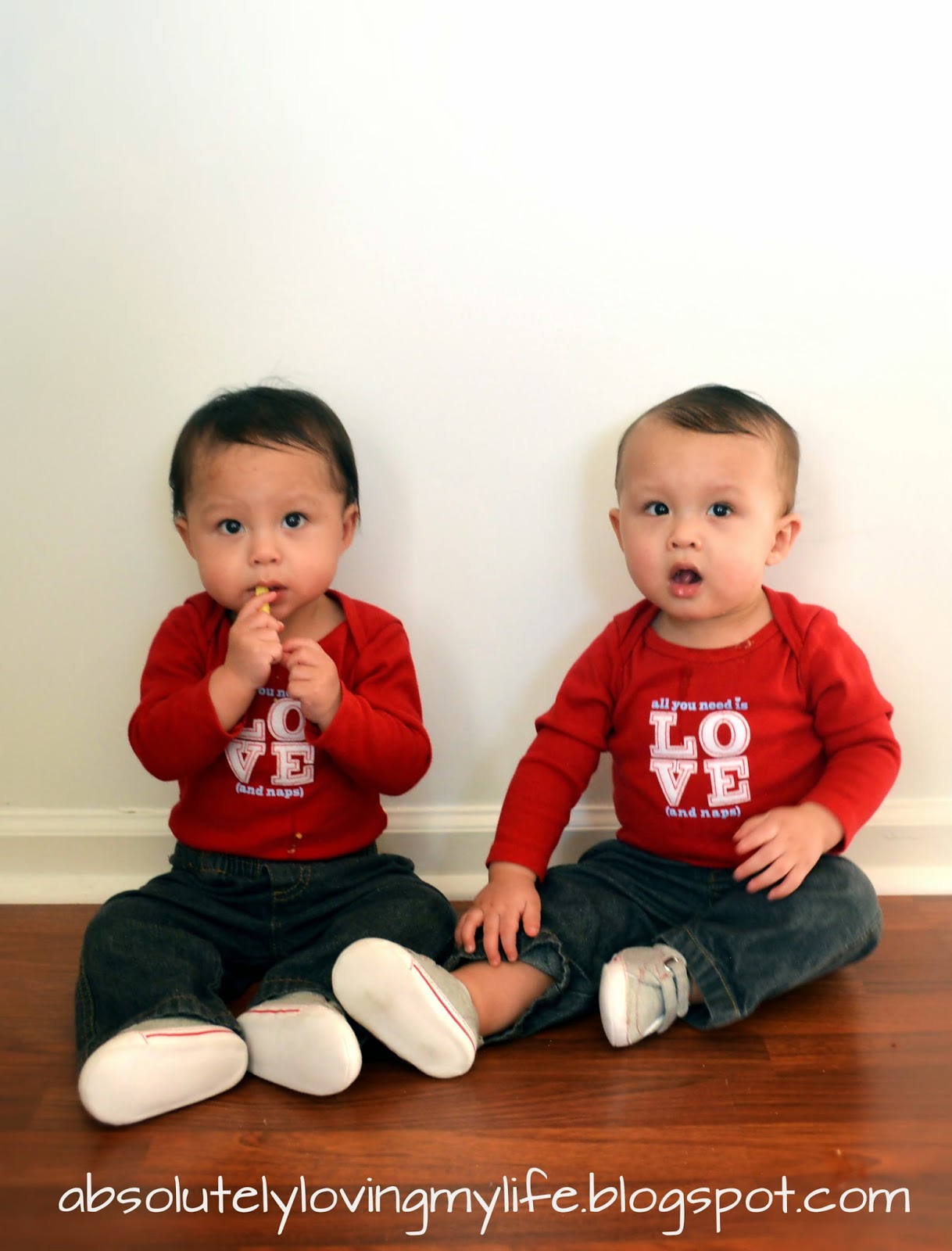 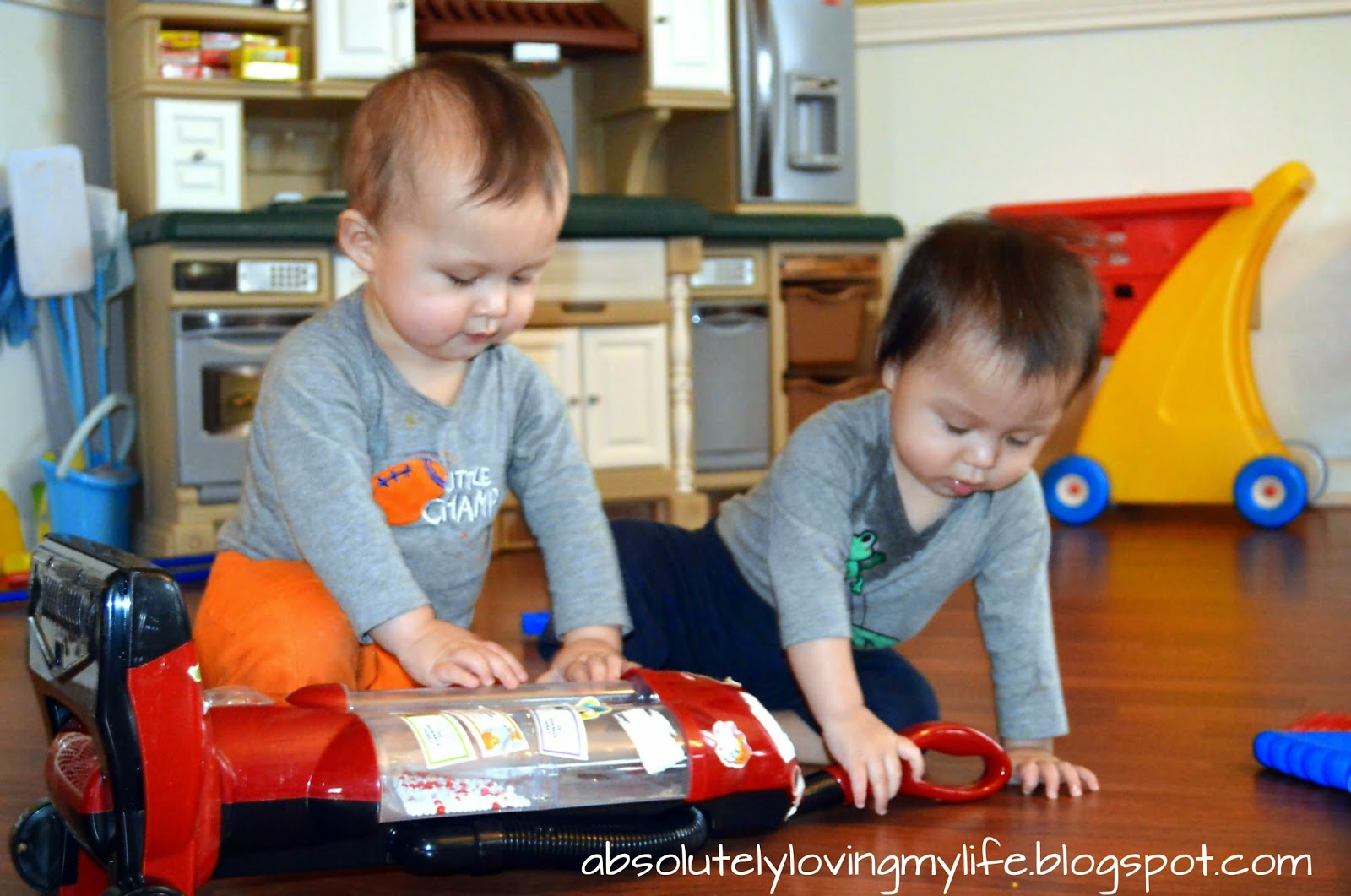 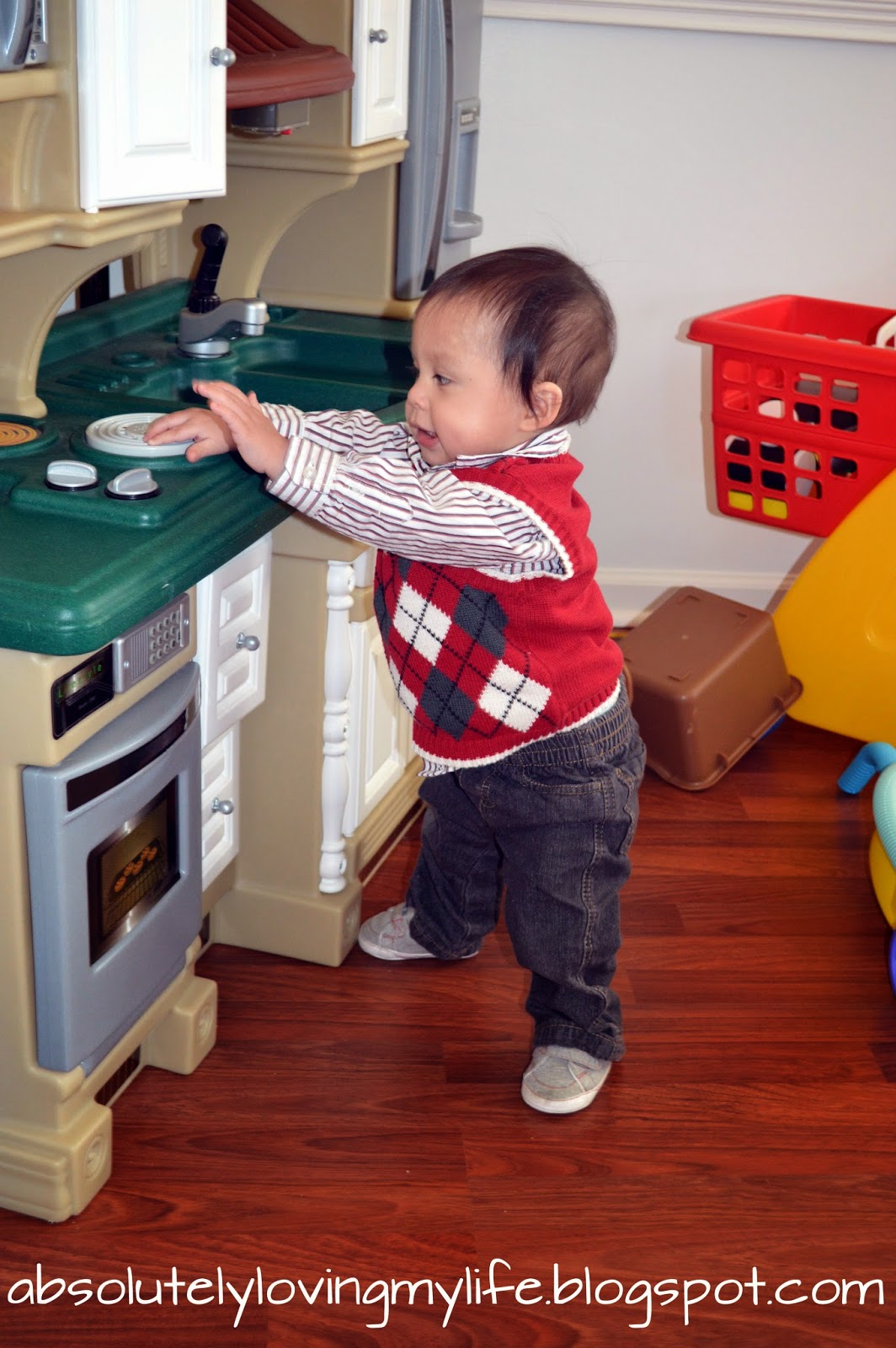 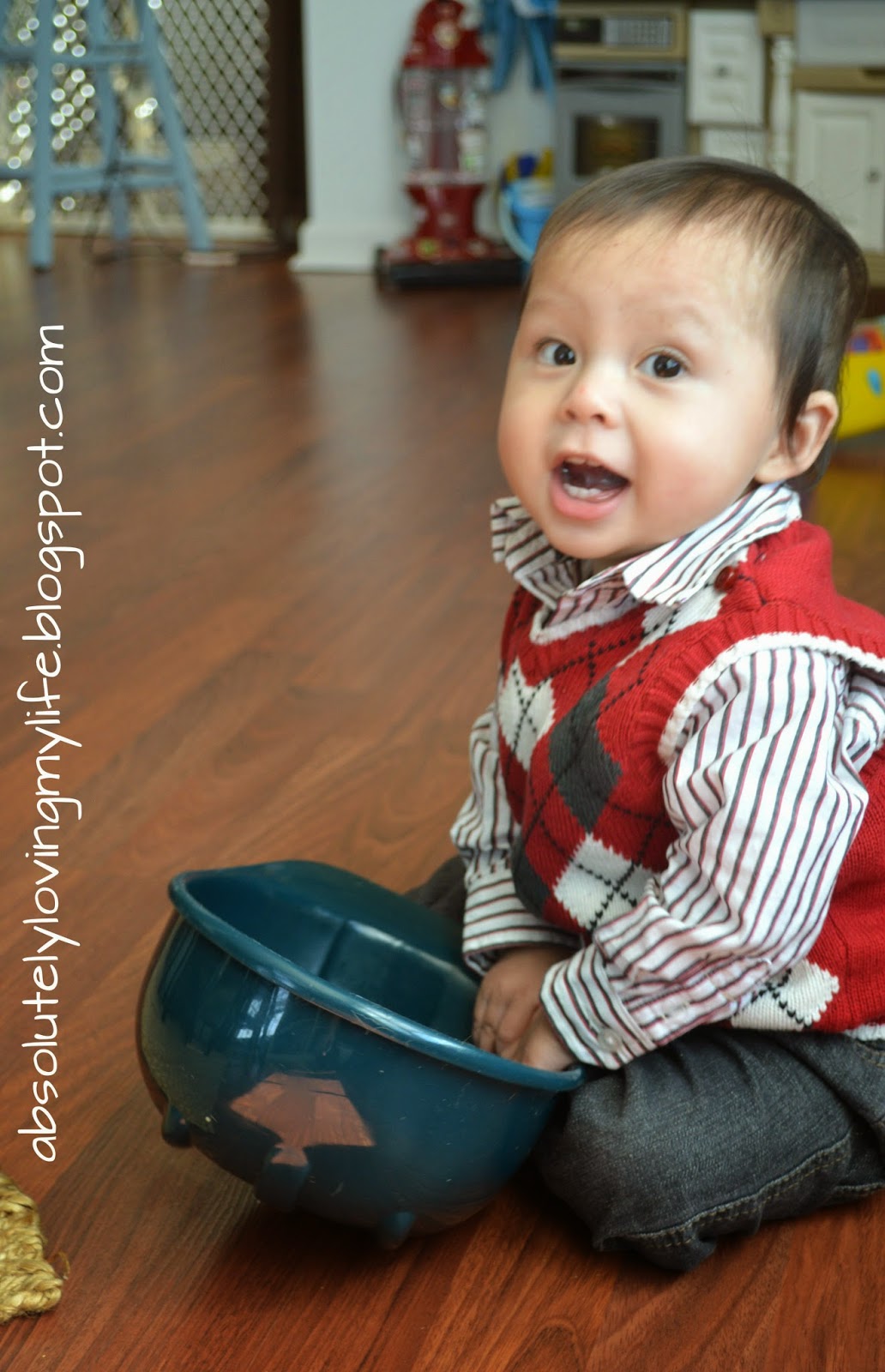 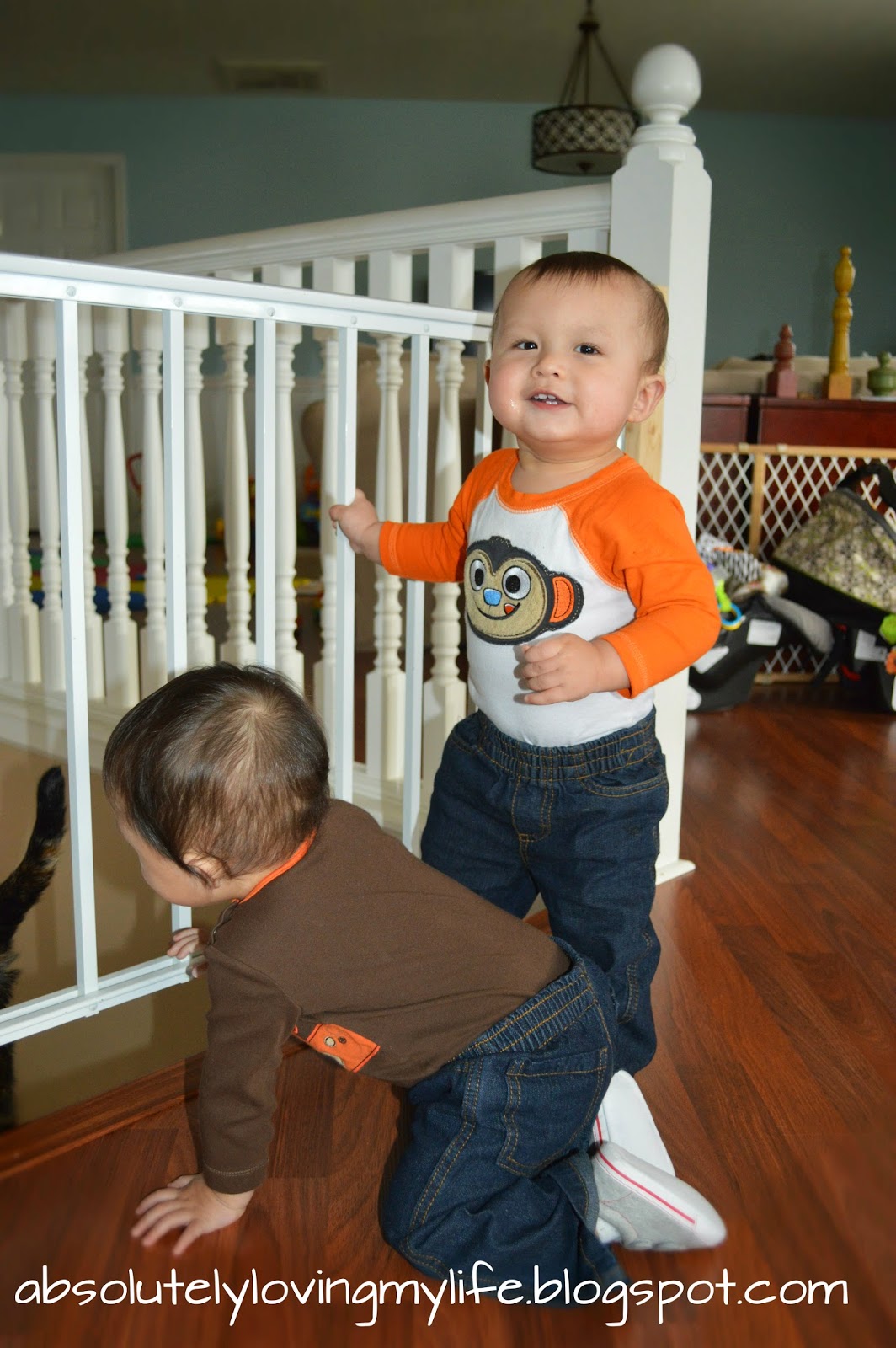 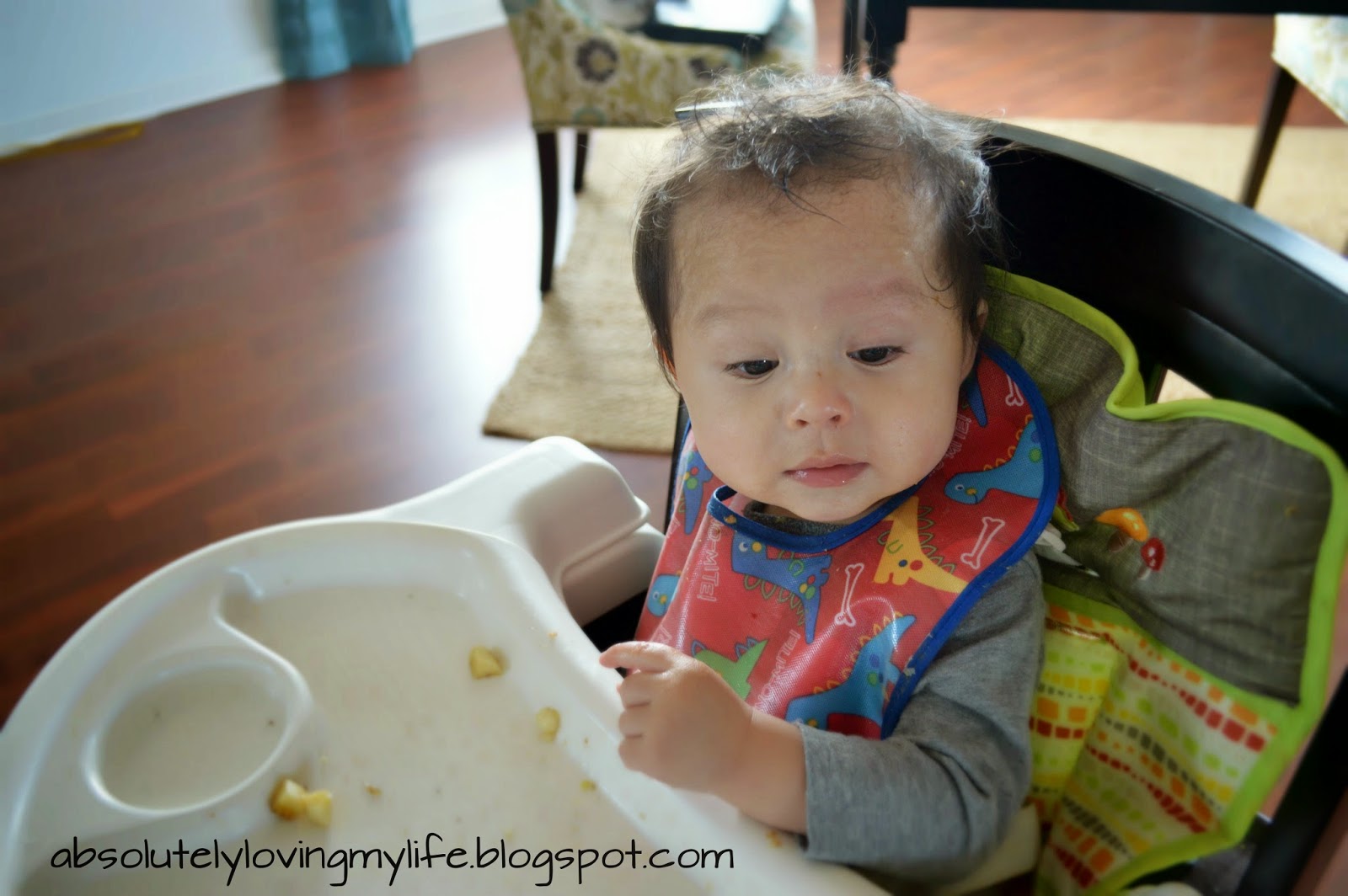