I've been away from my blog for a couple of weeks, due to just being busy!  With Father's Day and Fourth of July celebrations, and then a few days out of town in between, I have had little time to sit down and blog. 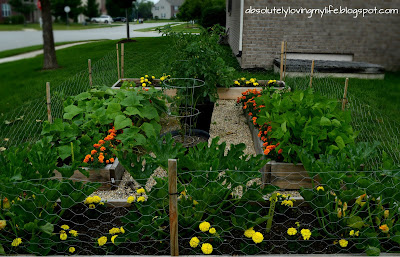 I thought I'd post a garden update to start the week off, since it has been about two months since we planted our garden.  It's been a bit of a rough year to be a first time gardener.  We have had A LOT of rain!!!  In fact, we haven't had to water our garden at all in about six weeks.  Because of all of the moisture, my garden got hit hard with a fungus.  Once the fungus cleared out, with much effort on my part, I immediately noticed things growing again.  In comparison to other gardens in the area, my garden is about 3-4 weeks behind in growth and production. 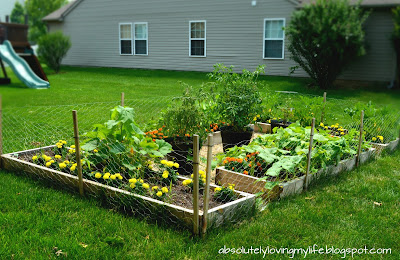 So far, our yellow squash plant has produced the most out of all of our plants. 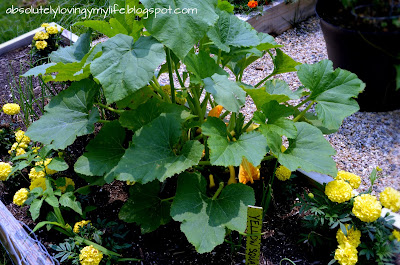 There are probably a dozen squash growing on this one plant right now, with this plant constantly flowering and producing more squash on a regular basis. 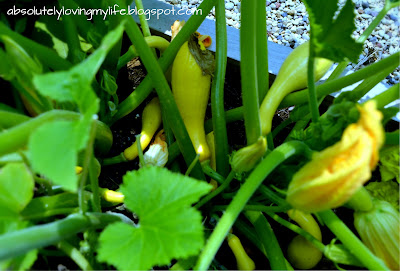 The three zucchini plants have been flowering, for what seems like months, but within the past week, they've finally started producing zucchini! 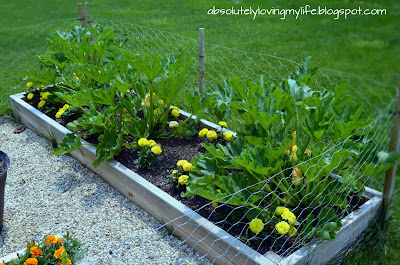 Each plant currently has about 3-4 zucchini growing on them. 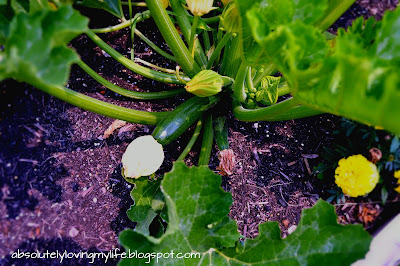 The cucumber plants have taken over the box.... 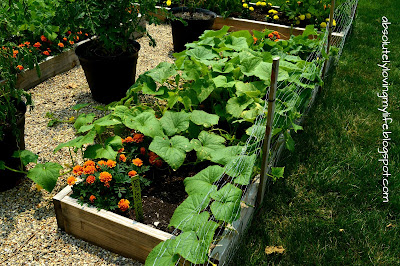 ....and the pickling cucumber plant has started to produce a few cucumbers this week. 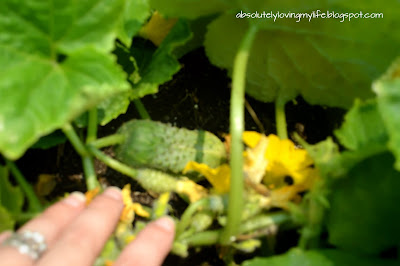 The green beans have done well from the very beginning, but we are still waiting for the day we get to bring green beans from the garden to the supper table. 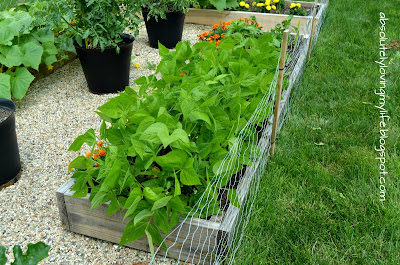 The red and green peppers were my best looking plants for most of the summer, but they have once again been attacked with a fungus.  I'm working to get it out of the box, so currently, they aren't looking so great. 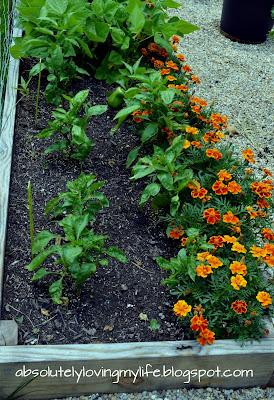 We have one lonely green pepper that has been growing for weeks.  I'm patiently waiting for more peppers to follow. 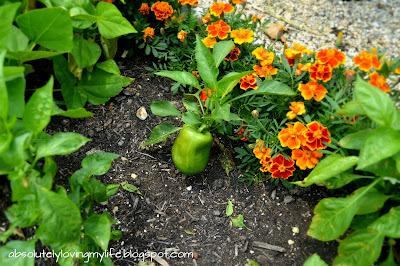 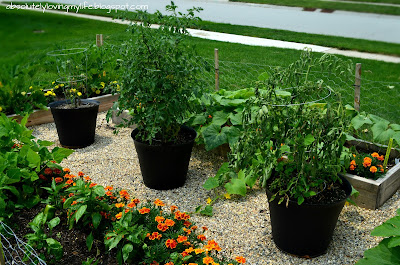 The rain has been really hard on my potted tomatoes this year.  I lost one plant pretty early in the season.  All the tomato plants were planted the same way, but for whatever reason, this pot had a hard time draining.  Every time we had a hard rain, which has been often, this pot would flood with standing water, and I'd have to go empty the water.  I think it is safe to say, this plant is done. 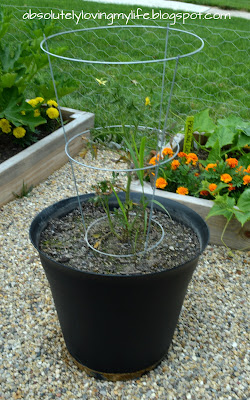 My other two tomato plants were doing ok, until I went out of town for a few days.  While I was away, we had quite a bit of rain, and when I returned, I found another tomato plant withering away from too much moisture. 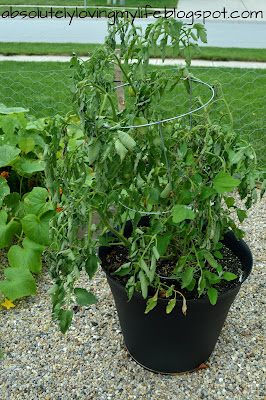 That made me a little sad, because it had started to produce a few small tomatoes before I went out of town. 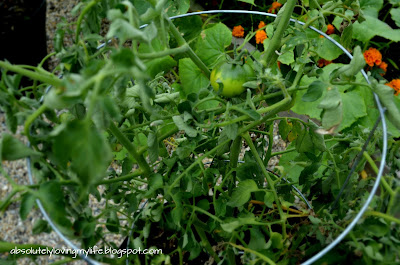 That leaves me with one surviving tomato plant this season. 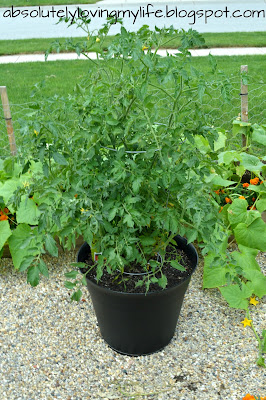 While it is in the process of producing tomatoes, I think it is safe to say I am not going to be canning a bunch of salsa or tomato sauce this year. 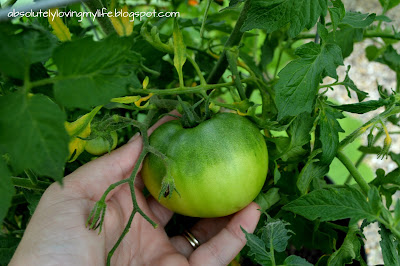 No, the garden has not done as well as I had hoped in two months time, but compared to where my garden was exactly one month ago..... 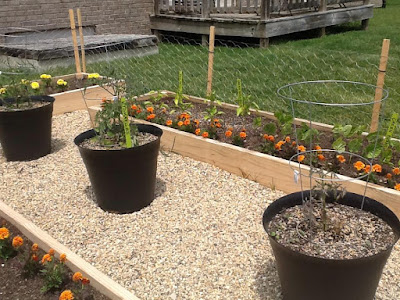 ....due to that fungus I was referring to, that literally took over my garden beds and plants and prevented my plants from growing.... 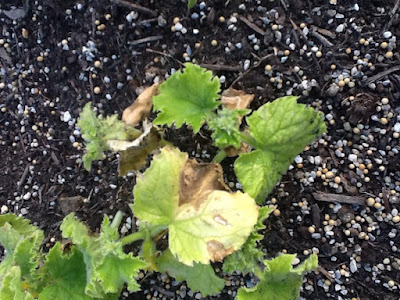 Well, compared to a month ago, I'm pretty happy with where we are now.... 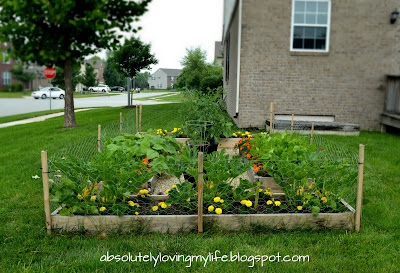 ...and I'm looking forward to finally being able to harvest my garden in upcoming weeks!
Posted by Rachel at 1:12 PM