If your like me, and you’re trying to decide what you want to do for your toddler's one year old pictures, then you’ve seen all of those cute cake smash pictures on Pinterest.

Thanks to good ol’ Pinterest – seriously, how did moms ever live without it -  I knew I wanted to do a cake smash at the end of our boys’ one year old photo session.

It’s a great idea really.  I mean, after all, it’s like practice for the big day….only in style!  Because really, the actual birthday cake smash is so busy and surrounded with family and friends, that it is highly unlikely one would get frame-worthy pictures of such messy cuteness!

And so the decision was made!  We were doing cake smash photos at the end of their birthday session.

Now the next question was, WHAT TO WEAR!  Not me of course…but my little guys….what was I going to dress them in that would be adorable and could get destroyed with chocolaty goodness at the same time.

And once again, I can thank Pinterest for what I chose to dress them in.  I went with the classic yet adorable choice….the barely dressed baby in a cloth diaper and tie!  Because is there really anything cuter than a half naked baby with cake all over him?

I had a ton of cute patterned cloth diapers, but I chose the grey set to go with the yellow tie. And the great thing about using the cloth diapers is that the cake washed right off, because the diapers are made of material that is very stain friendly.  I've been using them since the  boys were six months old, and I don't have any stains on my diapers.

I chose the yellow polka dot tie, because I had leftover fabric from the bow ties I made for their birthday onesies they also wore for their pictures.  You can find a post about the birthday onesies here.  I had just enough fabric to make two ties and two bow ties.

And then once I decided on the yellow and grey, I made an easy banner for the background to match the outfit.  I also used two of my plastic Target plates that had subtle tones of grey in the pattern to put the cupcakes on.  And I chose two colossal cupcakes - yes, they are actually called colossal cupcakes and are sold for $3 a piece - from the Kroger bakery.  The colossal cupcakes were perfect for cake smash  photos.

I know this is a post about the neck ties, but I'm sure you are wondering how difficult clean up was after these pictures.  It was actually really easy.  It was the last of the pictures we had taken that day.  As soon as we were done, we put the babies in the bath and then Matt played with them in their room while I wiped up the mess and mopped the floors.  It really wasn't that bad at all.  As long as you have a plan to keep everyone out of the mess until you can get it cleaned up, you'll be fine.

Now back to the neck ties.  So I knew I wanted cute ties for our pictures, but I didn't want to pay a ton of money for ties that would only be worn once and get ruined......

....I found this baby tie pattern and tutorial and made my neck ties exactly like the tutorial.

These ties were perfect because they have Velcro on the back of the neck to make it easy to get on and off of a toddler.

Again, because I am not a seamstress, I made a no-sew version of this tie.  I cut my fabric out using the pattern, but instead of sewing, I ironed my seams and put them together using....

I know, I know....if you are a die-heart seamstress, stop reading now and don't shame me.

But seriously, the hot glue worked...and these ties were only photo props for me.  And surprisingly, the cake washed off of the ties by gently hand washing them in the sink and then letting them flat dry, so the ties could be used again if I ever wanted to use them.  And because I used extra fabric I had already bought for the birthday onesies, these ties didn't cost me anything.  Can't go wrong there!  Plus, I think they turned out pretty cute! 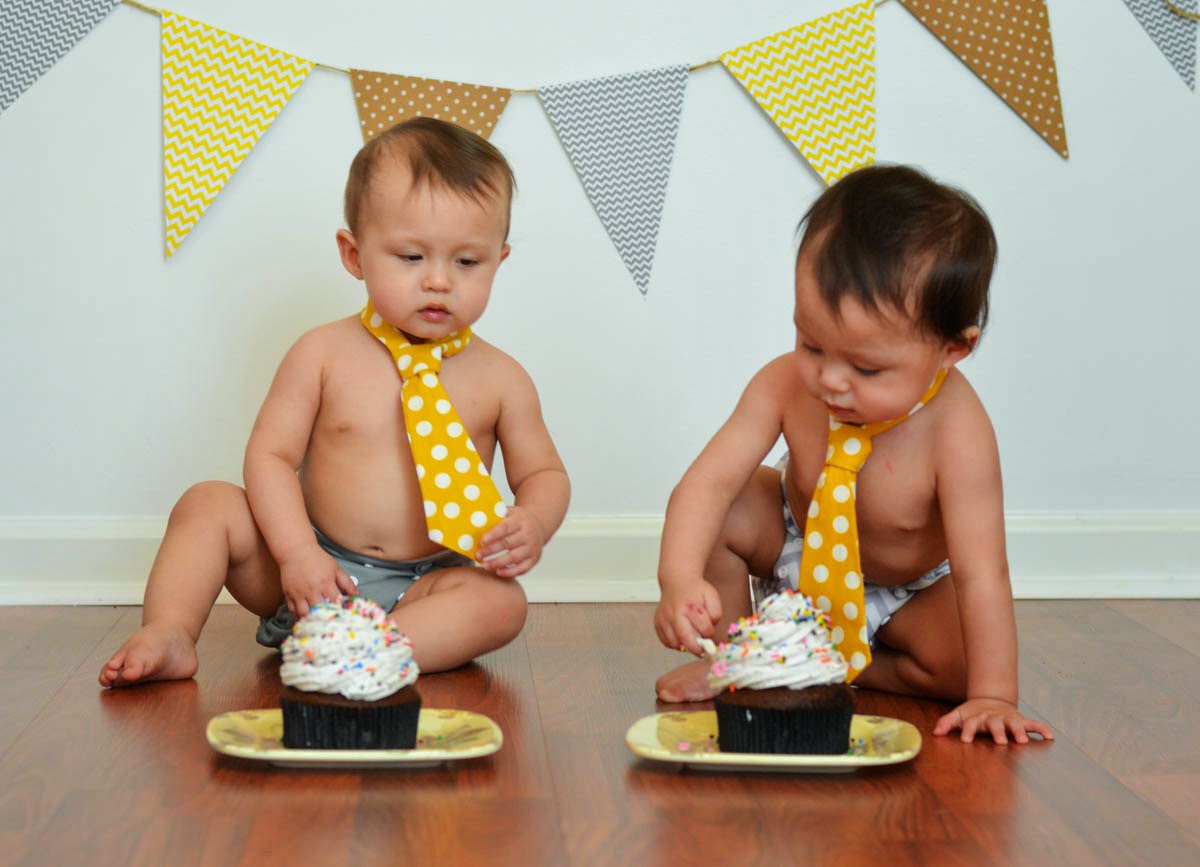 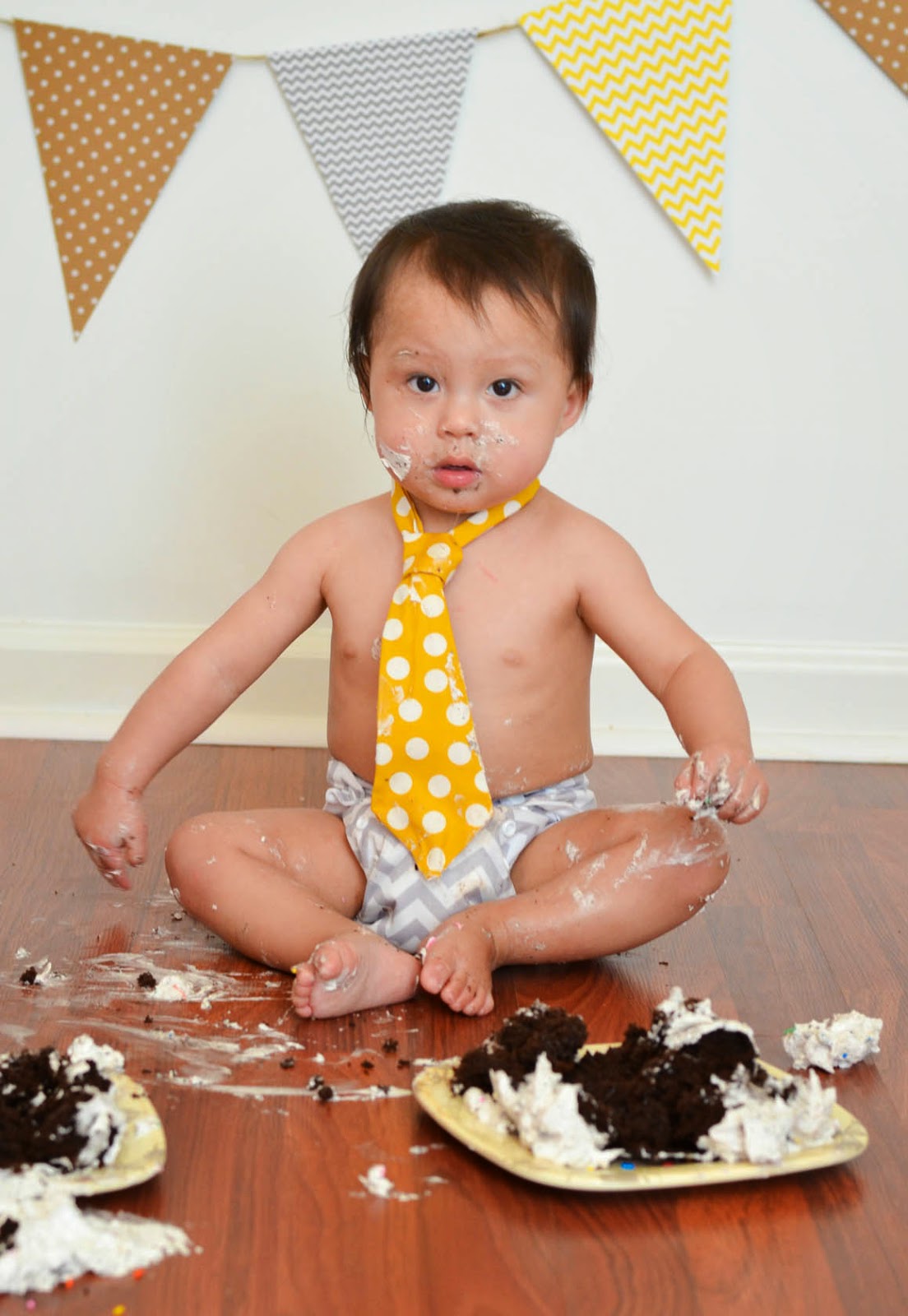 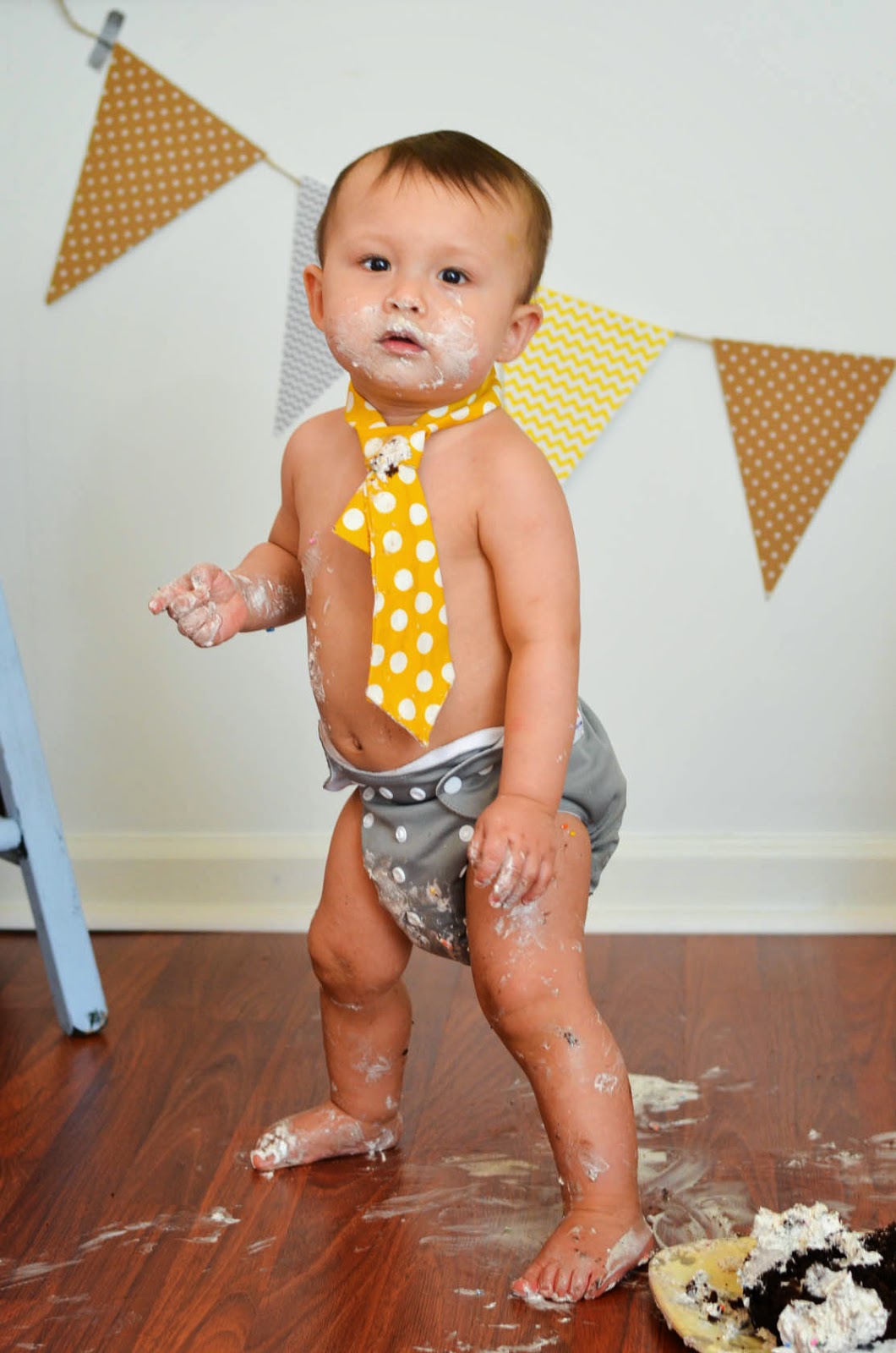 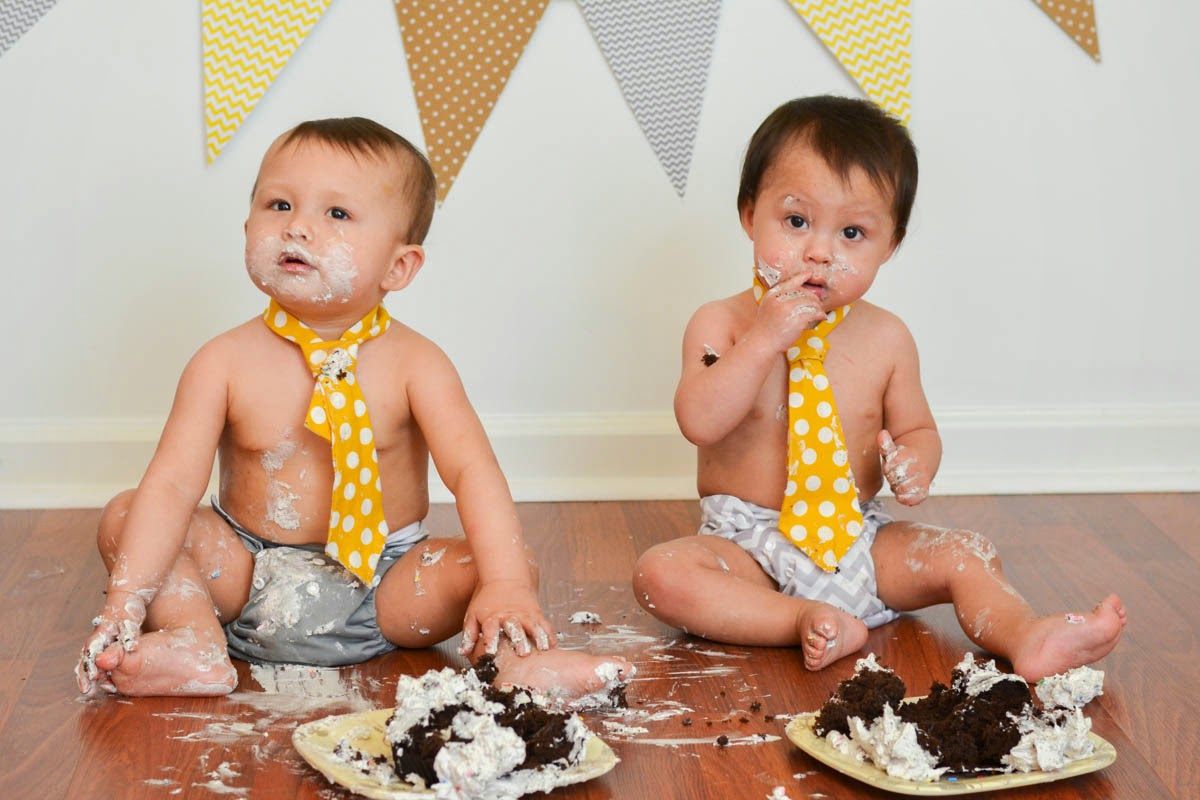 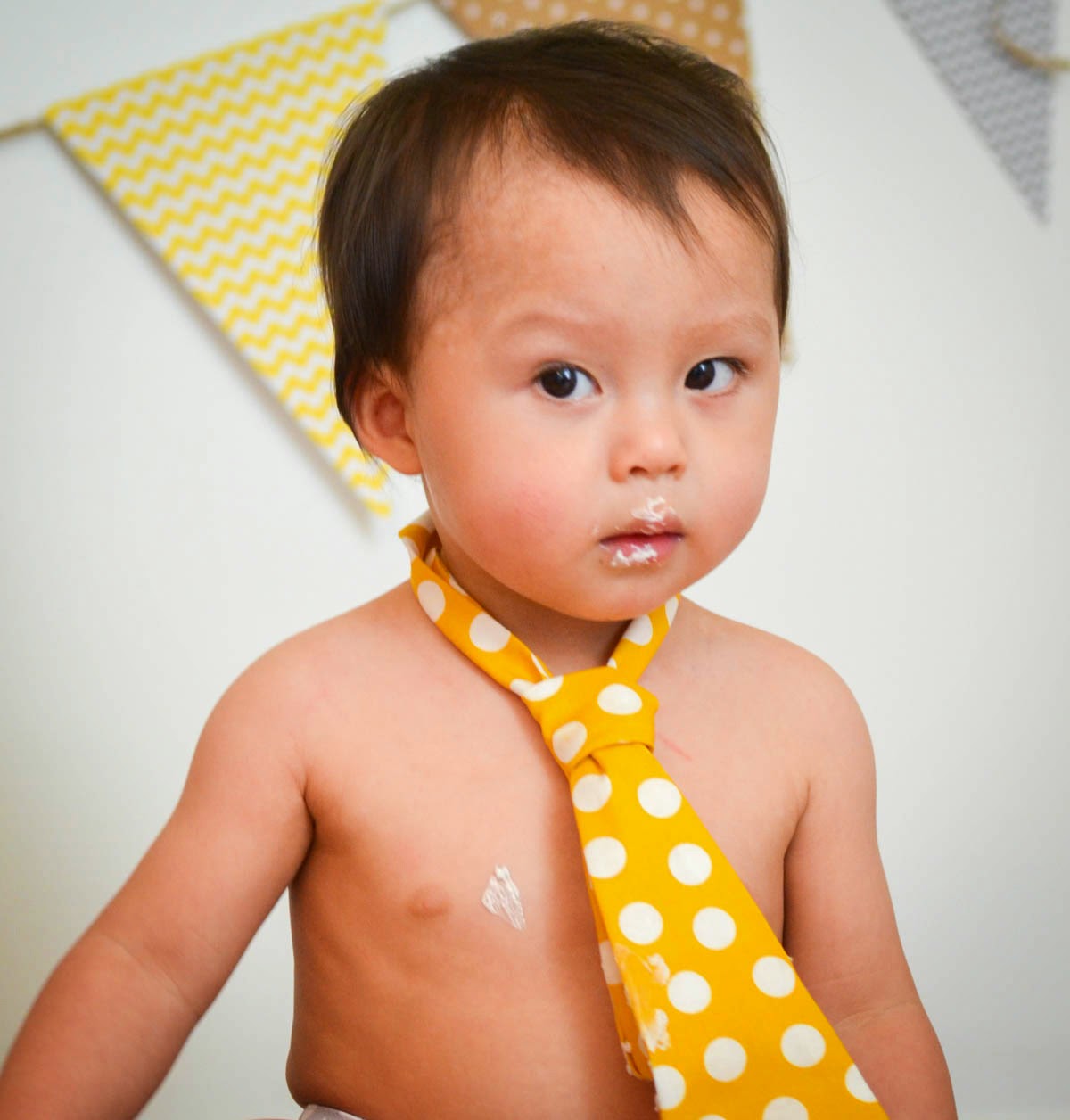