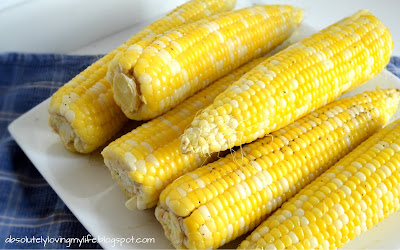 Corn on the cob, a summertime favorite!  My husband LOVES corn on the cob!  In fact, his mom sent us home with four ears of leftover corn on the cob from a family get-together over the weekend, and he ate all four for an evening snack before bed!  Since he had a birthday this week, it was only natural for me to make corn on the cob to go with his birthday supper that consisted of barbecue chicken drumsticks, coleslaw and garden tomatoes.  And so the boys and I walked down the street to the farmer's stand and bought Daddy a dozen ears of corn for part of his birthday supper. 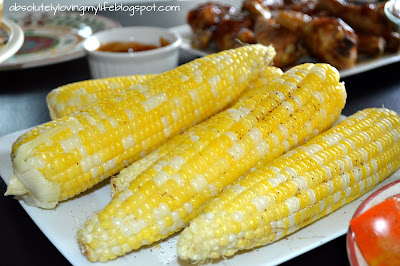 But here's the thing.  We usually grill corn, and I was unable to that on a weeknight while my husband was at work and I had the twins at my ankles while I cooked dinner.  I know you can boil corn, but I decided to turn to Pinterest for the easiest way to cook corn on the cob.

THANK YOU PINTEREST!  You have yet again made my life easier.  I saw this method on several pins from several sites, so who knows who originally put it out there in the Pinterest world.  Whoever you are, I thank you, and I'm passing on the knowledge.

Seriously, this is foolproof and so easy!  The corn turned out perfect, and there was no mess!  I don't know about you, but shucking corn can get messy when I do it. This was mess free, and resulted in perfect corn on the cob. 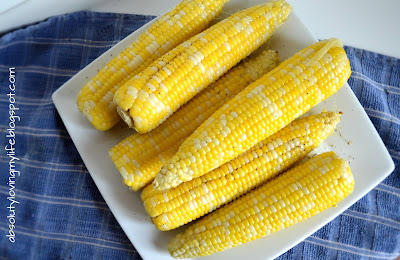 This isn't really a recipe, as much as it is basic instructions.

STEP ONE: Preheat oven to 350 degrees and place corn un-shucked on a baking sheet lined with foil.  The foil is optional.  What is not optional is cutting the "hairy" ends of the corn off before placing on the pan.  Otherwise, your corn might catch fire in the oven.  That would definitely NOT be good!

STEP TWO:  Bake for 30 minutes.  Ok, so everyone seems to say 30 minutes of bake time.  My corn turned out good at that time, but I found it was better and softer when I made a second batch and baked it for 40 minutes.

STEP THREE:  Take out of the oven and peel off the outer layers.  You'll find they peel away very easily now that the corn is cooked.  Unlike when corn comes off grill, there is no  mess when shucking corn cooked in the oven.  To make the peeling easier, you can cut off an end before peeling, but that is optional.

STEP FOUR:  Eat and Enjoy!  I usually salt and pepper the corn and rub a little bit of butter on it before serving it for a family supper.
Posted by Rachel at 7:43 AM